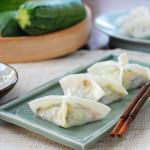 To make the square dumpling shape, wet the edges, pinch the opposite sides of the wrapper and seal the edges. Do the same with the other two sides. Make sure to seal the middle tightly.
Regardless of the shape, make sure to seal tightly as the dumplings will be boiled. Adapted from Bongnyeongsa Temple Recipe