This instant noodle dish, jjapaguri (or ram-don), from the movie Parasite is getting highly popular all over the world. It’s easy to make at home and quite delicious! 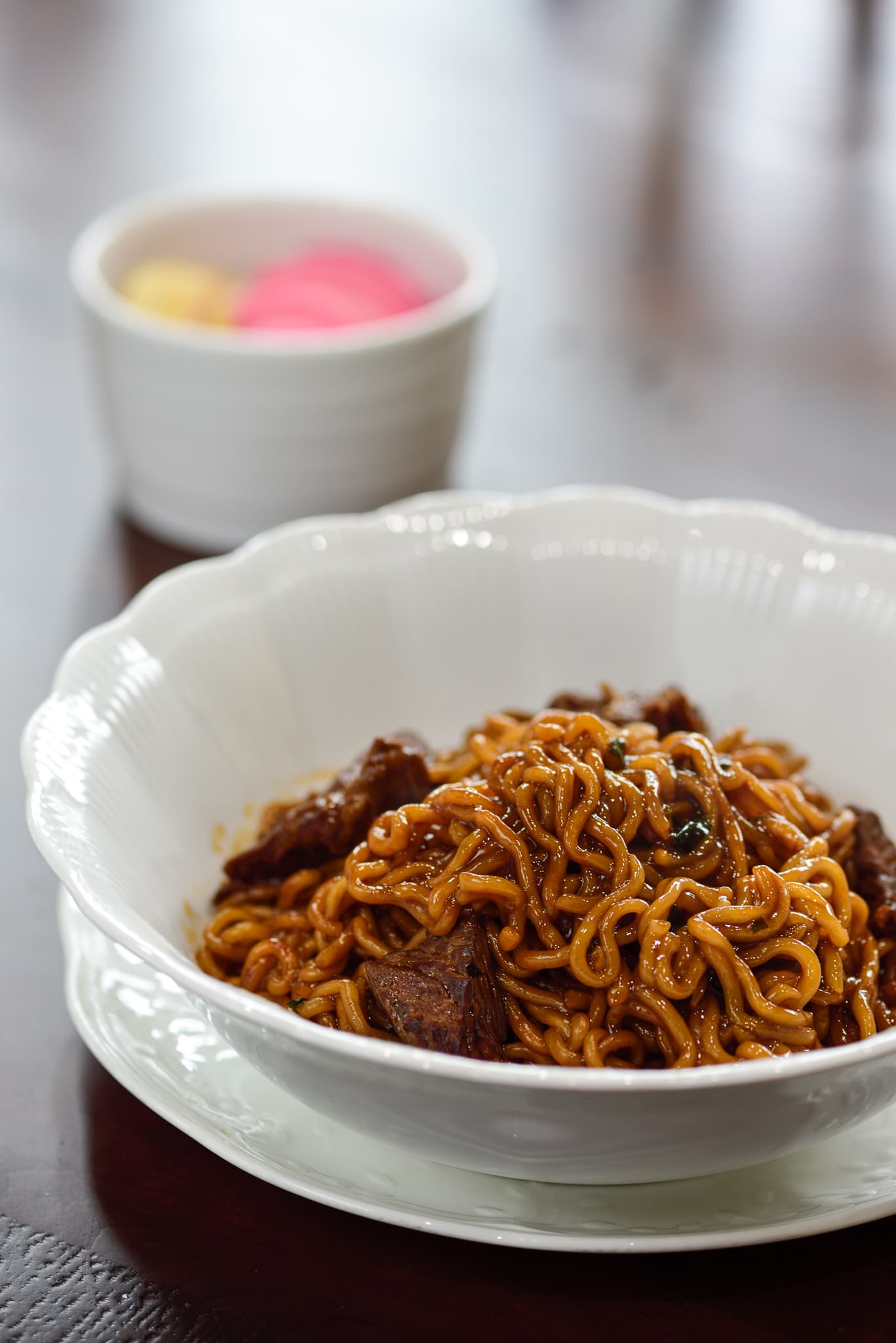 I know I’m a little late to the Jjapaguri (or Chapaguri, 짜파구리) party. After seeing it in the movie Parasite (Gisaengchung, 기생충), I became curious about reactions to this steak version of the popular instant noodles. Lo and behold, it took Korea by storm in 2019 since the release of the movie. And it’s rapidly spreading to the rest of the world. So, let’s jump on the Jjapaguri bandwagon and try making it!

I can’t wait to find out next Sunday what happens with the film’s six nominations at the Academy Awards. Go Parasite! 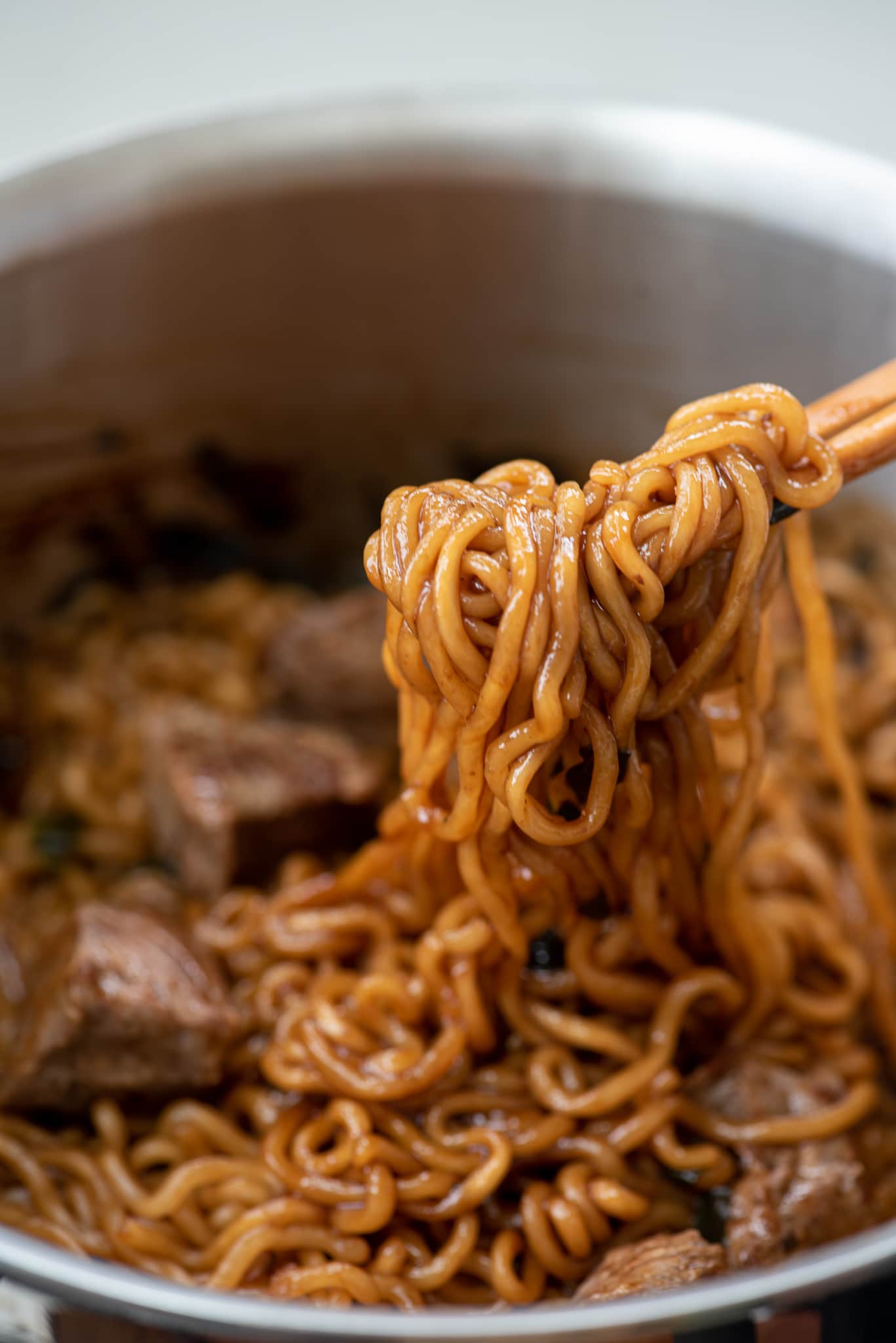 The movie tells the story of two families — the rich and the poor. As a class subtext, this cheap instant noodle dish gets upgraded with expensive beef, Hanwoo (한우). It refers to a breed of small cattle native to Korea. Hanwoo beef is considered premium quality and very expensive. In the movie, the rich mom asked the housekeeper to make Jjapaguri with Hanwoo for her son, although the subtitles simply called it sirloin. She ended up eating the dish alone, which was served in a high-end china (Juliska), at her big wooden dining table. 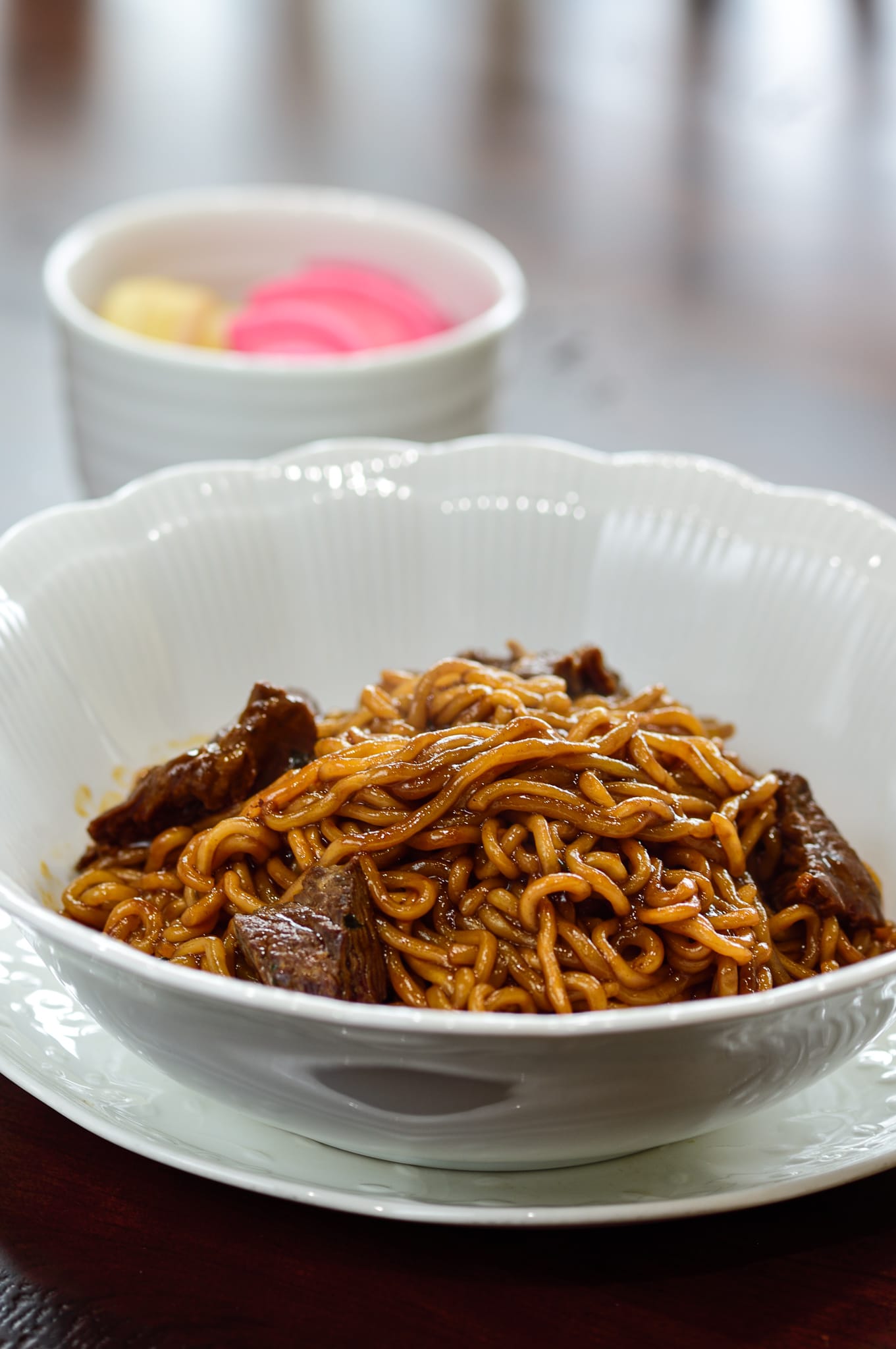 Jjapaguri is a dish created by consumers by combining two highly popular instant noodle brands —Chapagetti (짜파게티) and Neoguri (너구리). Actually, its popularity started in 2013 when this brilliant combination of two distinct noodles was featured in a Korean TV show.

Chapagetti is an instant noodle version of the popular Korean-Chinese noodle dish, jajangmyeon (also spelled jjajangmyeon or chajangmyeon). Interestingly, while there’s nothing Italian about it, the company came up with the name “chapagetti” which is a portmanteau of the words, chajang (blackbean sauce) and spaghetti.

Neoguri, on the other hand, is a spicy seafood flavored instant noodle soup with thick and chewy udon-style noodles. According to Korean news media, Neoguri is Bong Jun Ho’s favorite instant noodle brand.

The combined dish is instant jajangmyeon with a spicy kick and extra flavor from the Neoguri soup base.

Apparently, the translators of the movie couldn’t translate Jjapaguri into something non-Korean speaking audience could relate, so they called it “ram-don” in the subtitles from the words “ramen” and “udon.” 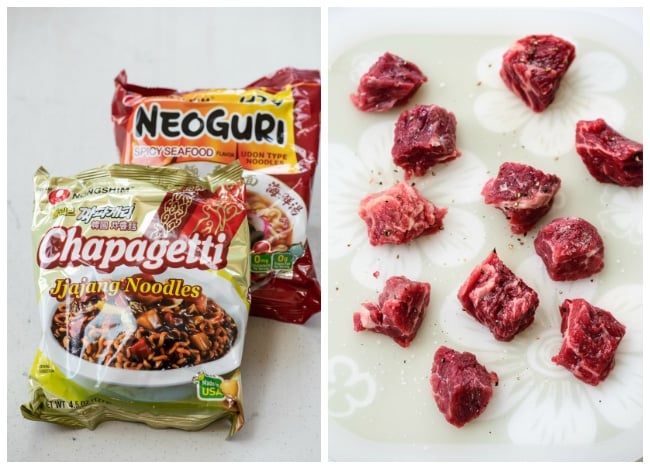 Here, I used the recipe on the Korean website of the company that makes these instant noodles, and simply added some beef as the movie showed.

The beef actually adds a nice twist to the dish while making it more substantial. I tried to stay true to the movie, short of using Hanwoo quality beef, but you can, of course, add any protein you like.

Simply cook the noodles with the veggie flakes from the packets, and drain the noodles, reserving the water. Return the noodles back to the pot, and add a cup of the reserved water and the sauce mix. Stir the noodles well until the sauce is well distributed and slightly thickens, about a minute. Stir in the cooked steak and the oil from Chapagetti.

The company website says to use the entire packet of the Chapagetti sauce and ⅗ of the Neoguri spicy sauce. Adjust to your taste. It also suggests a fried egg or cucumber slices as optional toppings.

Watch how to make it!

Have you tried this jjapaguri recipe? Please rate the recipe below and leave a comment! Stay in touch by following me onYouTube,Pinterest,Twitter,Facebook, andInstagram. 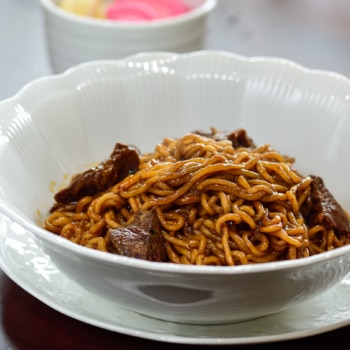 Jjapaguri with Steak from Movie Parasite