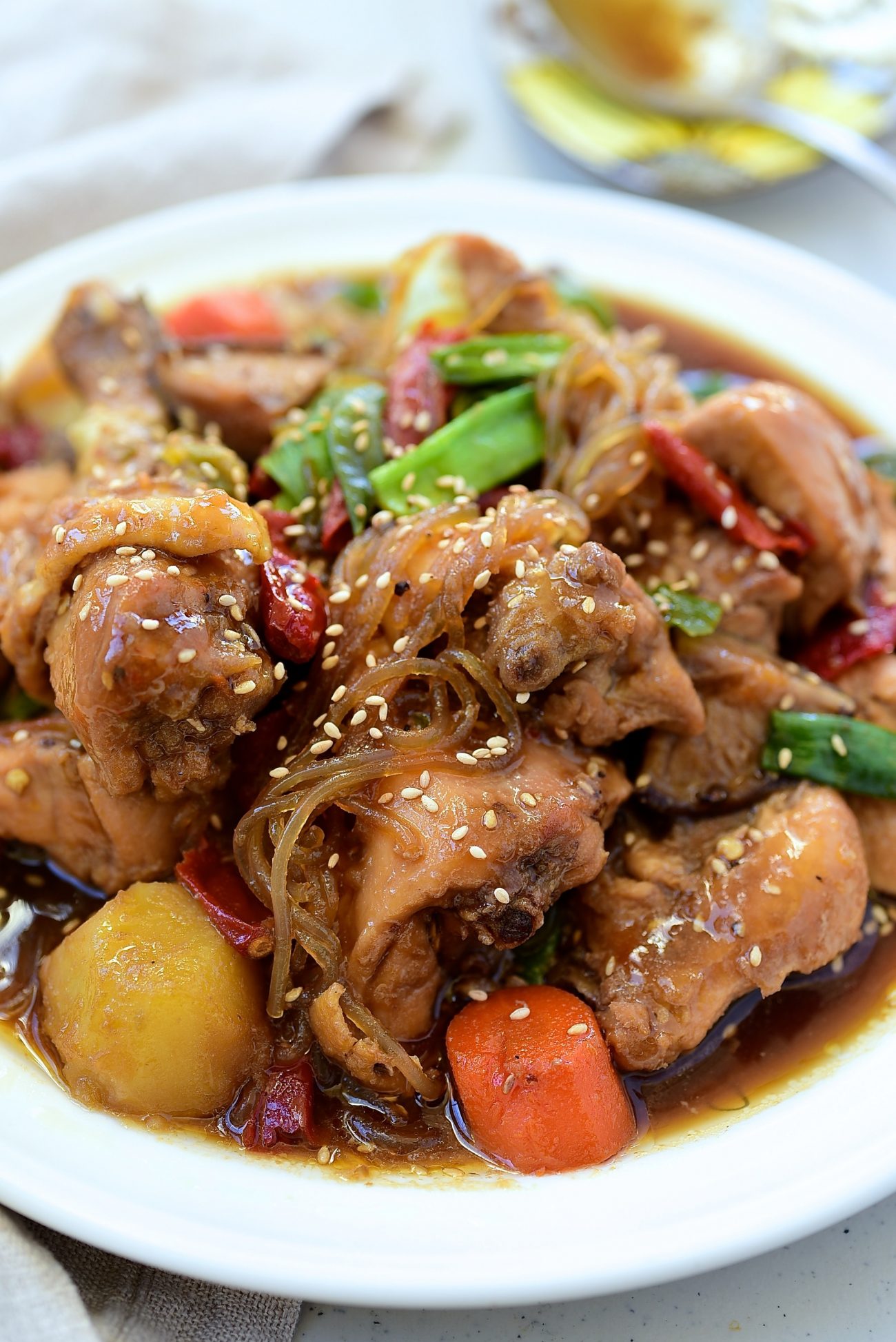 Jjimdak (찜닭) is a braised chicken dish. Jjim generally refers to dishes that are steamed, stewed or braised in a sauce, and dak means chicken. These two syllables can be reversed, so jjimdak is also called dakjjim (닭찜). A popular spicy version is known as Andong jjimdak (안동찜닭). It’s a huge restaurant favorite that’s easy to make at home with a few basic ingredients!

Andong jjimdak, which originated from the city of Andong, is a spicy braised chicken dish that has become enormously popular since the late 1990’s. Braised in a sweet and savory braising liquid, the dish gets its nicely clean spicy kick from dried whole red chili peppers and fresh hot chili peppers. Unlike dakbokkeumtang (also called dakdoritang), no gochujang (Korean red chili pepper paste) or gochugaru (Korean red chili flakes) is used!

Making Andong jjimdak is relatively simple. The dish uses small chicken pieces and is cooked over high heat. As such, it cooks up pretty quickly. In Korea, braised chicken dishes are usually made with a whole chicken cut up, but you can use pre-cut parts if you want. However, for this dish, you’ll still need to cut the chicken parts into smaller pieces. 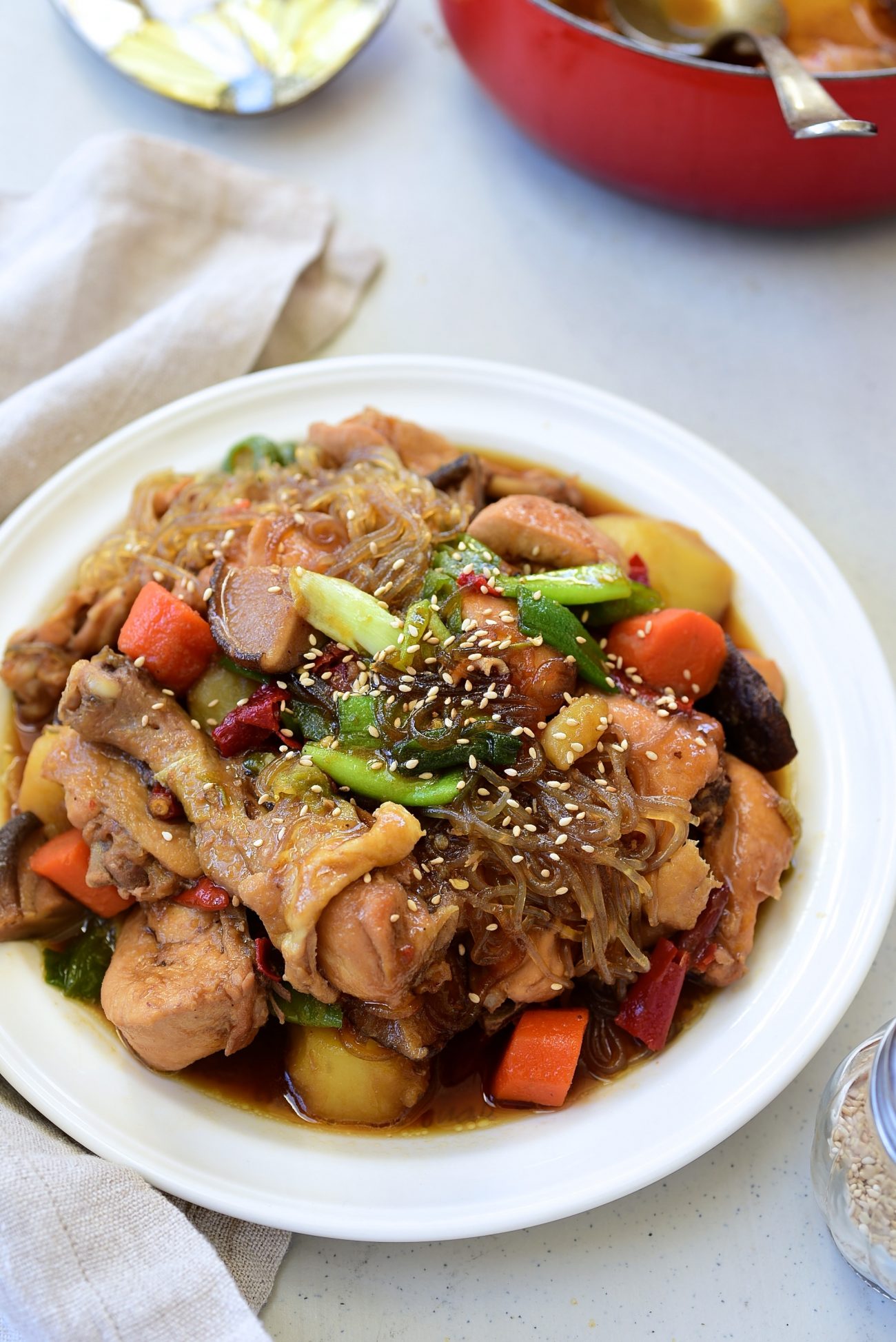 You can reduce the amount of chili peppers or omit them entirely to make a mild version. This reminds me of the braised chicken dish I grew up eating.

When I was a small child, my parents raised a few chickens in our backyard. I remember feeding baby chicks and watching them grow. It was utterly fascinating to see a mother hen lay her eggs. They were great company and provided us with warm fresh eggs every day. Occasionally, some of their lives were cut short by my father who had to do the unpleasant job to feed his family. These events apparently stirred strong emotions in one of my brothers. To this day, he does not eat chicken. As for me, I loved the sweet and savory braised chicken dish my mother used to make.

For vegetables, I used potatoes, carrot, onion, mushrooms, and scallions. Green cabbage is another common ingredient for this dish. Some people also add a little bit of leafy greens such as spinach and bok choy.

If you care about the color of the dish and want it to be as dark as the restaurant’s version you might have had in Korea, you can add a tablespoon of instant coffee powder, some caramel sauce or dark soy sauce if you have it. 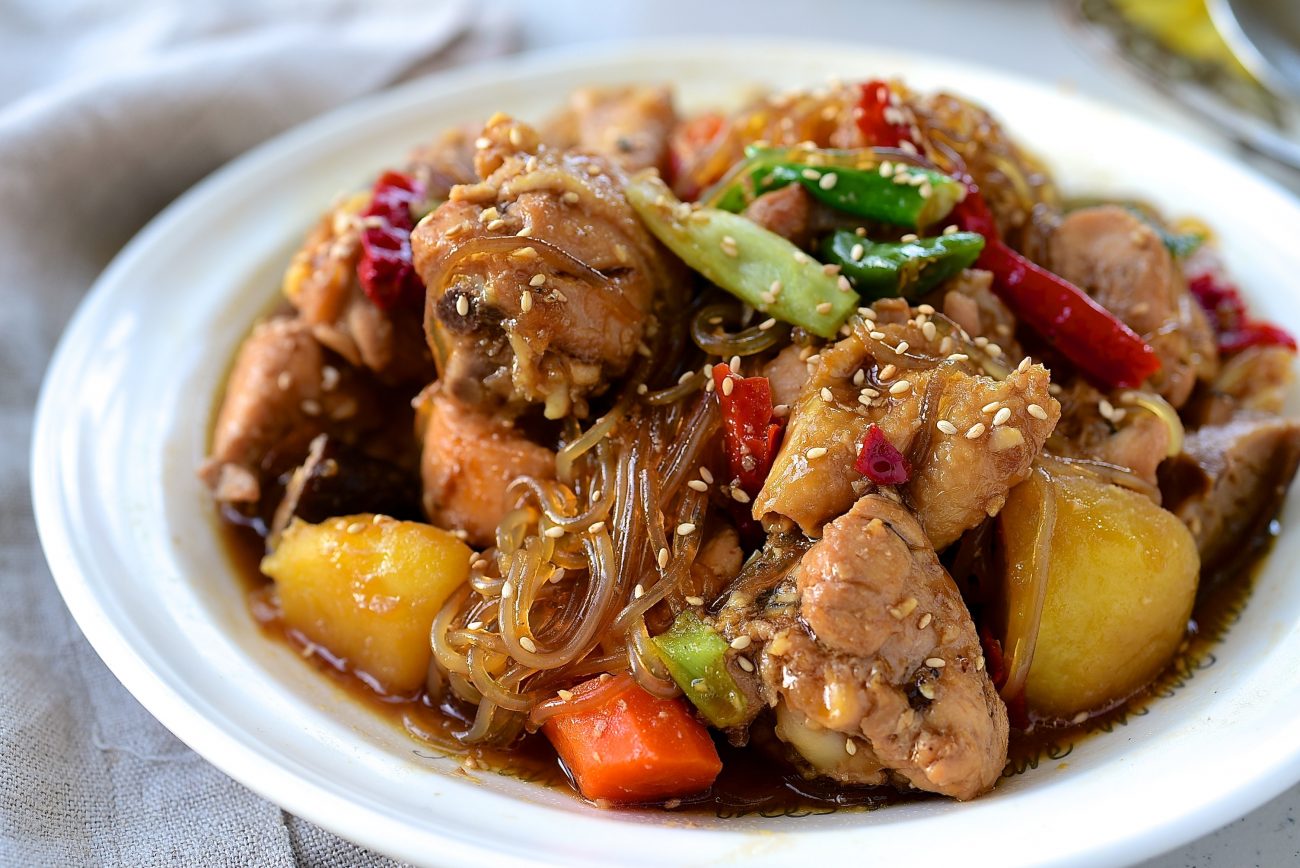 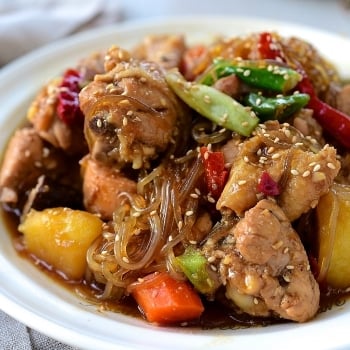 You can prepare ahead of time up to step 5. When ready to serve, bring it to a boil and do the final step.
Tried this recipe?Mention @koreanbapsang or tag #koreanbapsang!

This Andong-style jjimdak recipe was originally posted in February 2011. I’ve updated it here with an improved recipe, more information, and new photos.