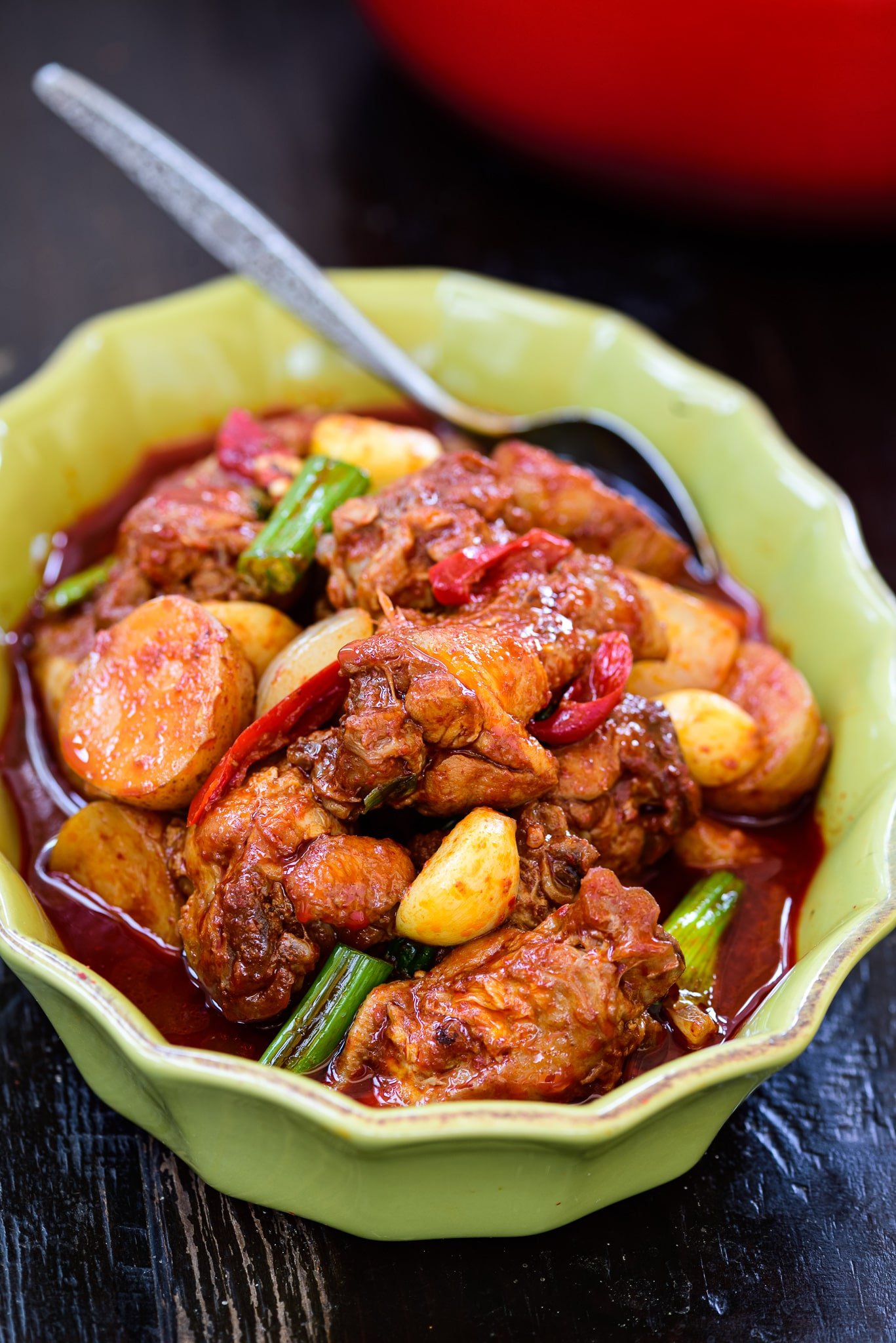 Also called dakbokkeumtang (닭볶음탕) or dakmaeuntang (닭매운탕), dakdoritang (닭도리탕) is a classic chicken dish that’s cooked in a spicy red sauce along with vegetables such as potatoes, carrots, and onions. The result is succulent pieces of chicken packed with spicy and savory flavors! It’s a highly popular chicken dish both at home and restaurants.

The name of this dish has been a controversy in Korea. Dakdoritang is the name I grew up with. Dak means chicken and tang means stew. However, in 1980’s, the middle part “dori” became controversial. Some people had an opinion that “dori” originated from a Japanese word, so the Korean government came up with the other names mentioned above. In recent years, language scholars have showed a different view, saying that “dori” originated from a pure Korean word dorichida, meaning “cut up.”

Dakdoritang is made with small, bone-in chicken pieces. In Korea, it’s usually made by cutting up a whole chicken into small pieces. Since this dish is commonly made at home, a whole chicken is sold pre-cut at markets in Korea.

If you’re buying chicken parts at your local groceries, bone-in and skin-on thighs and drum sticks will be the best for this recipe because they lend much more juice and flavors to the sauce. I sometimes use only chicken wings.

For this dish, potatoes, carrot, onion, mushrooms, and scallions are classic vegetables. You can use Korean radish or sweet potatoes instead of potatoes. Mushrooms are also nice, and a red chili pepper or two give the dish an extra spicy kick and a pop of color. I also like to throw in whole garlic cloves instead of minced garlic. The mellowed and seasoned garlic is delicious! The more the better!

You can also add some starch noodles or tteokbokki rice cakes if you want. You may need more water if using any of these.

To cook this on stove top, add about 1.5 cups water to a pot along with the chicken and the sauce ingredients. Boil the chicken for about 15 minutes, stirring occasionally. And then stir in the vegetables, and cook for an additional 10 minutes. Continue to cook, uncovered this time, until the chicken is tender and the sauce is slightly thickened, about 5 minutes. 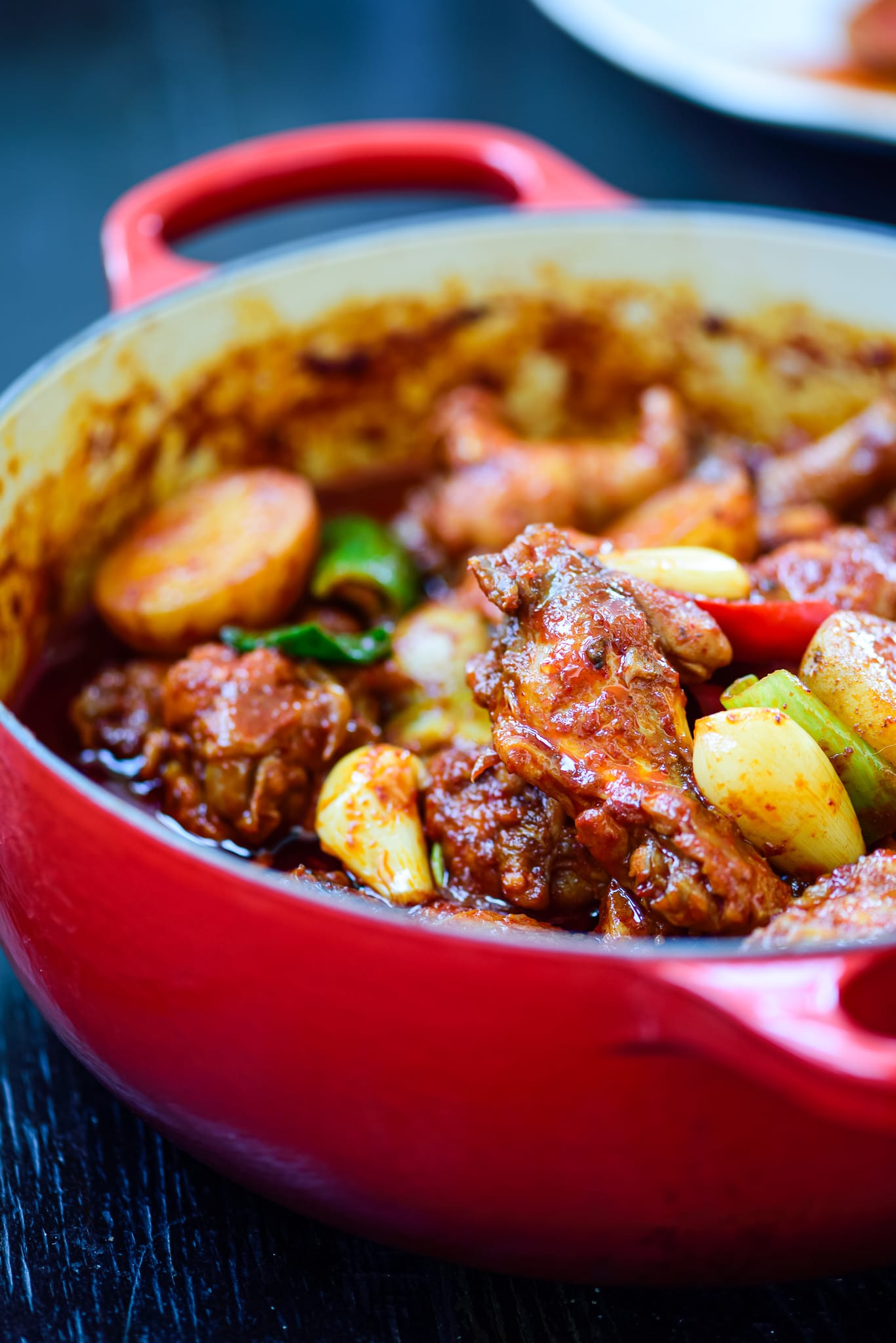 Unlike stove top cooking, the liquid doesn’t evaporate quickly in the slow cooker. The amount of sauce and other ingredients in this recipe yields sufficient liquid for slow cooking, leaving just enough sauce at the end. Simply place the chicken pieces and vegetables in the pot, and cook on high heat for about 4 hours (6 hours on low heat). 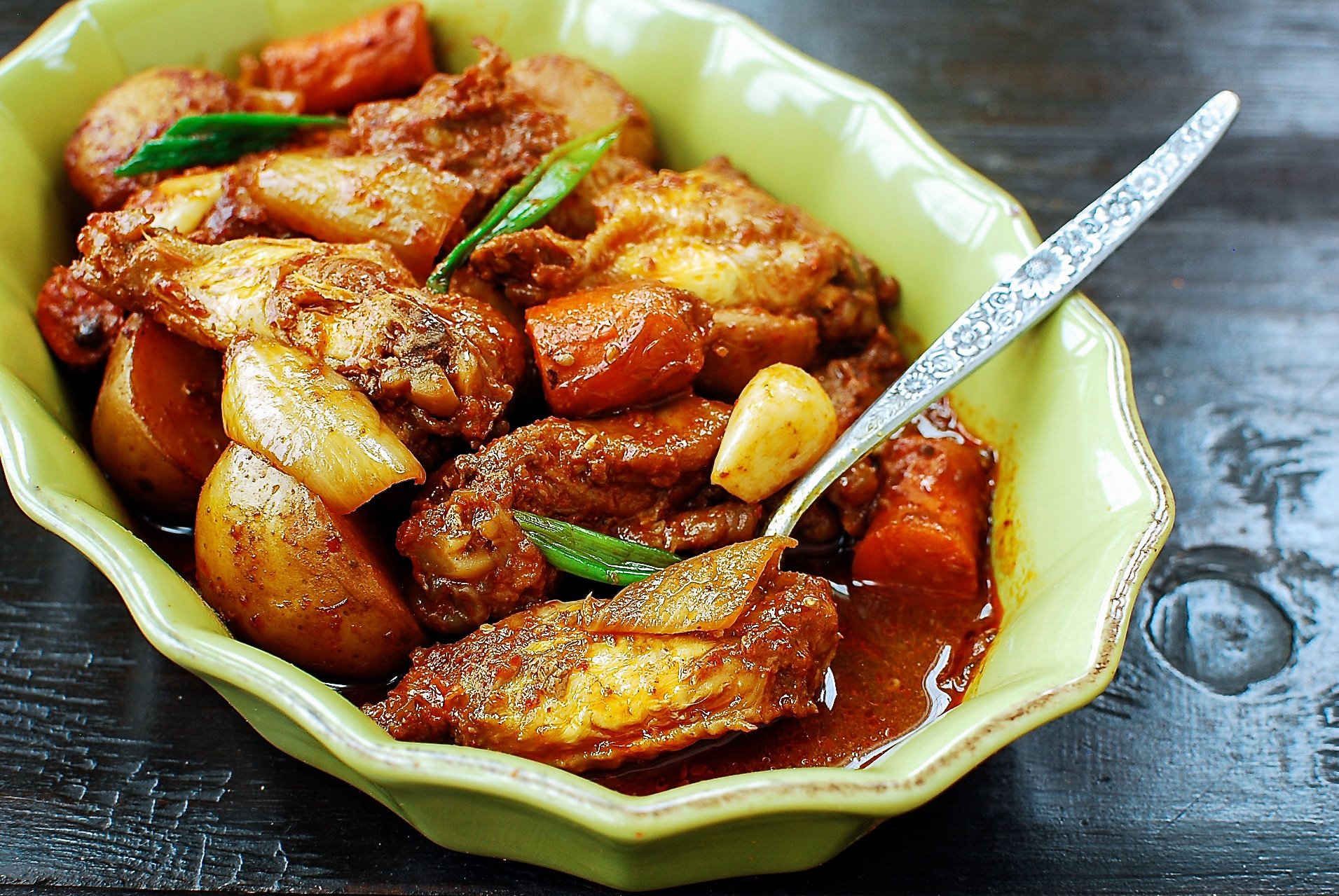 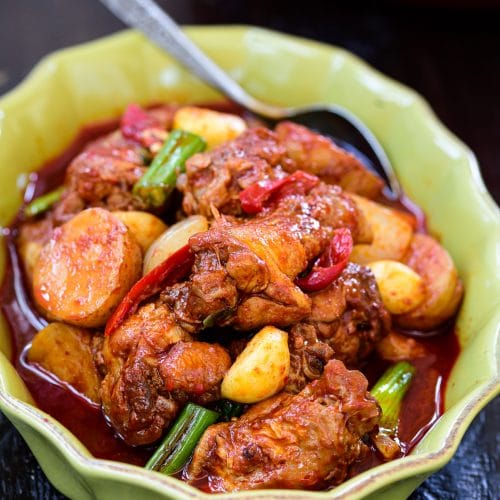 This recipe was originally posted in December 2012. I’ve updated it here with new photos, more information and improvements to the recipe.