Bossam is boiled pork traditionally served with cabbage wraps. The meat is boiled in a flavorful brine until tender and served thinly sliced. 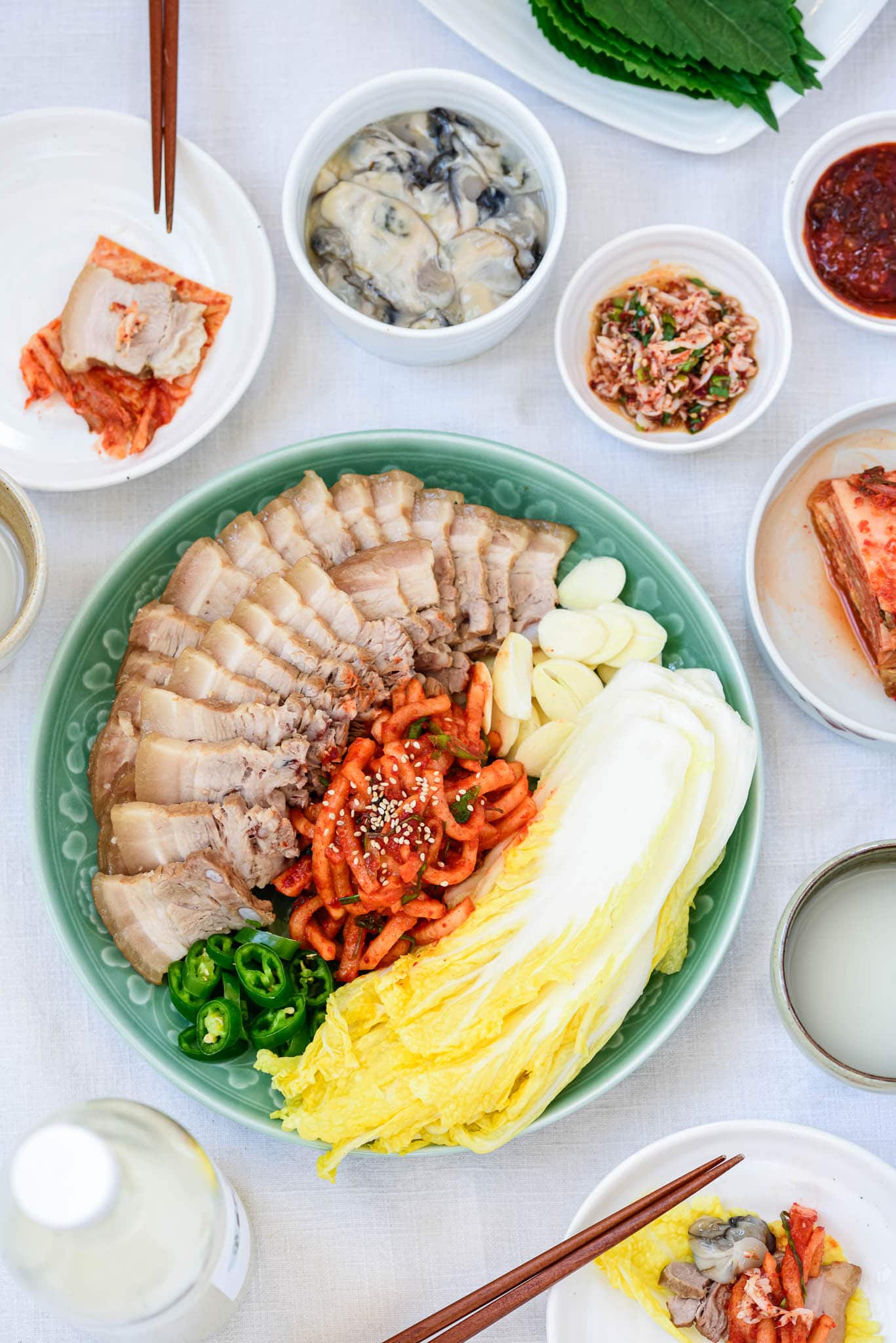 Bossam (보쌈) is a boiled pork dish. The meat is boiled in a flavorful brine until tender and served thinly sliced. At the table, each person wraps the meat in salted napa cabbage leaves along with radish salad (musaengchae/muchae) and salted shrimp. Salted napa cabbage is traditional, but lettuce and/or perilla leaves are also common.
In general, boiled pork is called suyuk (수육) in Korean. The name bossam refers to how the meat is enjoyed, i.e., wrapped in a salted cabbage leaf with some condiments such as salted shrimp and/or ssamjang. This way of eating pork started with kimjang (김장), an annual kimchi making event in preparation for cold months.
My family loves bossam, especially my father! He was born and raised in Jeju Island, where Korea’s most flavorful pork (meat from black pig) comes from, as seen on Netflix Korean Pork Rhapsody. So, he knows his pork! When it was time to make kimchi, my mother would boil big chunks of pork. Because there was plenty of salted cabbage and radish stuffing, all we needed was boiled pork to have a delicious bossam feast. 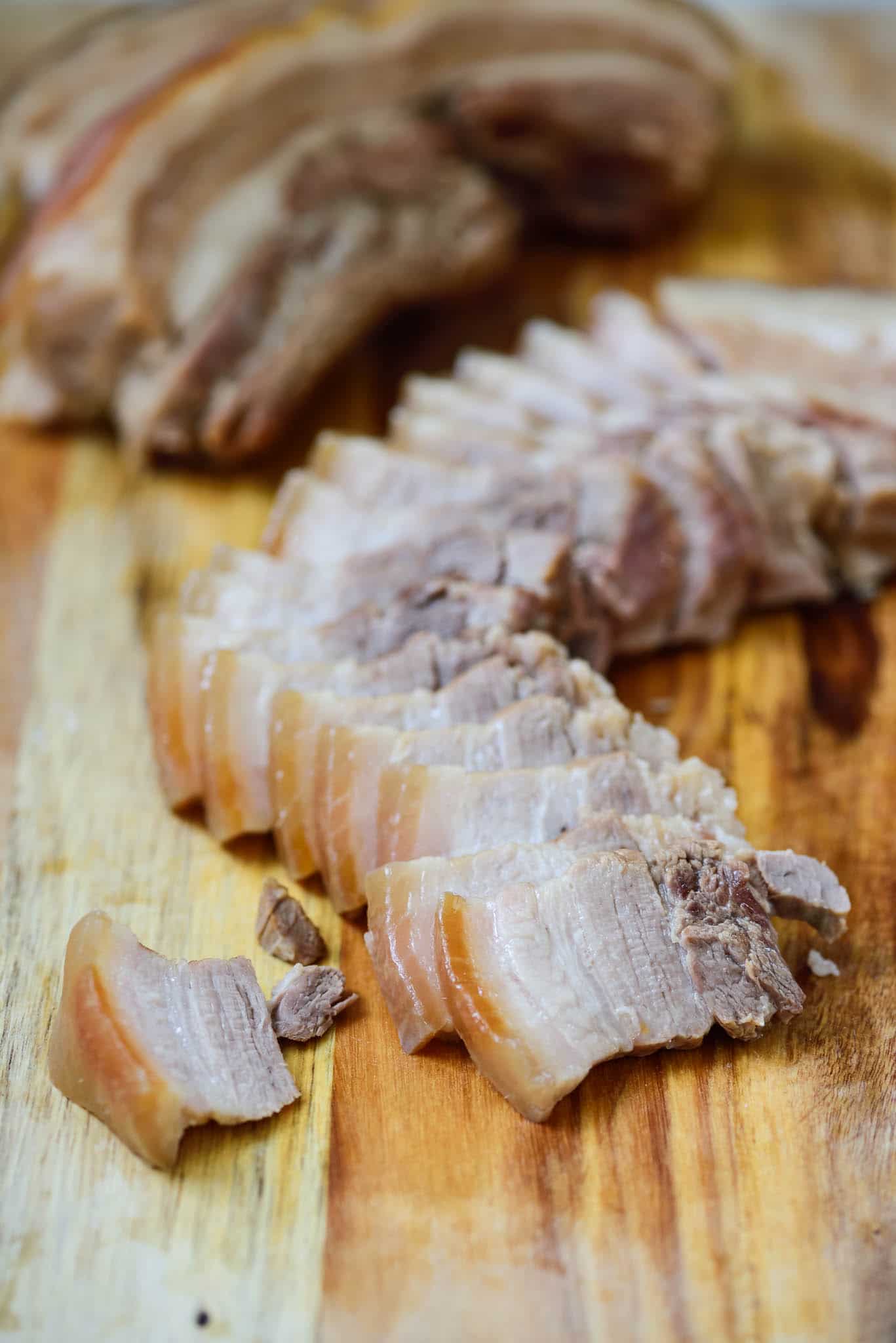 Uncommon for his generation of Korean men, my father spent a lot of time in the kitchen helping my mother, especially on kimchi making days. He was always the one who cut the meat into thin slices. Then, with his hands wet from pork fat, he would pick a cabbage leaf, place a slice of meat on it, top it with a dollop of the radish mix and a pinch of salted shrimp, and roll it up and enjoy the much deserved bossam.
Sometimes, he would add fresh garlic slices, chili pepper slices, and/or fresh oysters. Now, can you imagine the textural contrasts and the burst of flavors when you bite into this pork wrap?
My father also loves it simply wrapped in a piece of well fermented kimchi with some saeujeot (salted shrimp). Delicious! 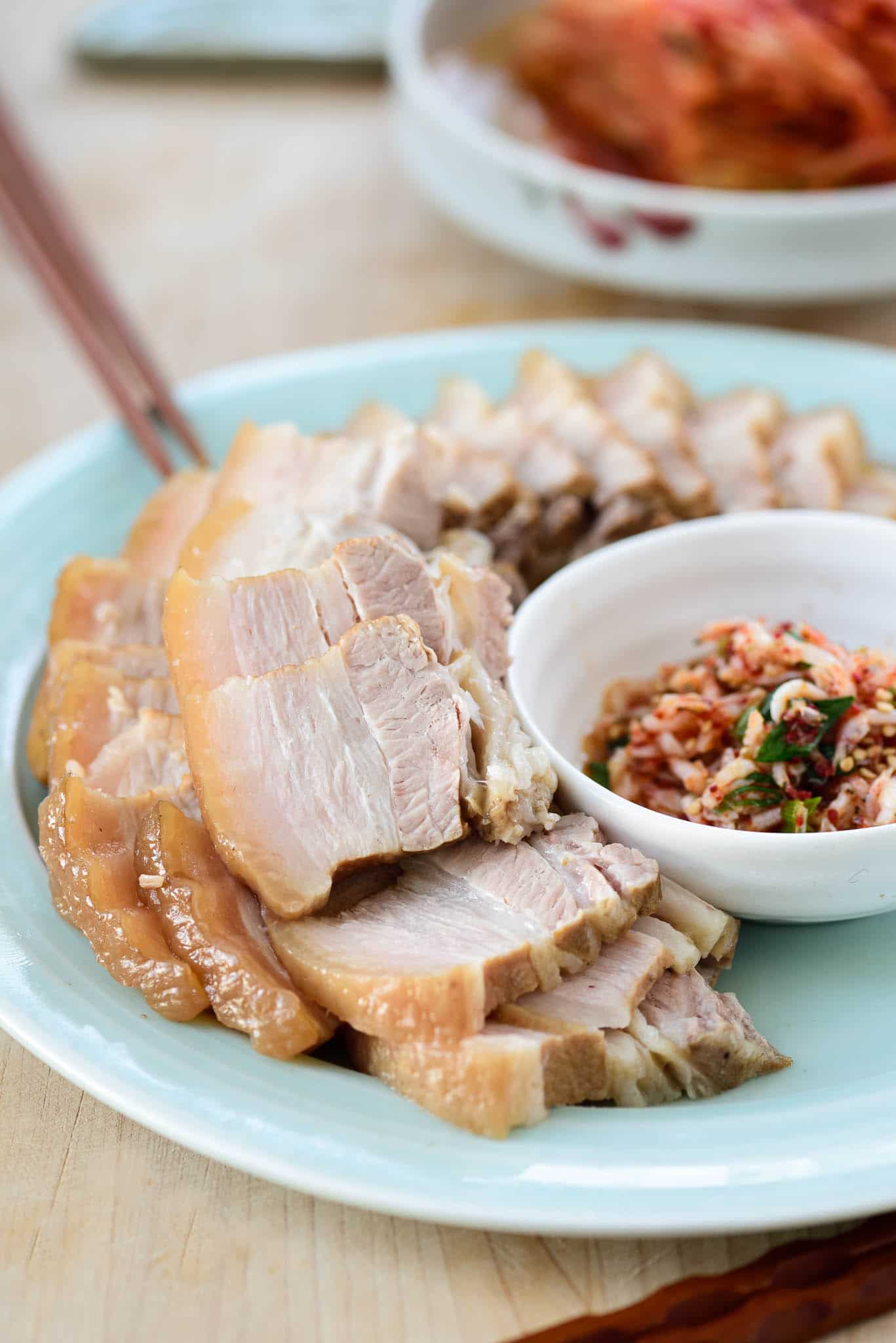 The cut of pork

Pork belly (samgyupsal, 삼겹살) and Boston butt (moksal, 목살) are the most commonly used cuts for this dish. Picnic shoulder (apdarisal, 앞다리살) is another option. You can also use a combination of these. If you’re using a big roast size, cut it into smaller pieces.

How to boil the pork

Korean cooks add a variety of ingredients to the boiling liquid to eliminate the unique smell of pork and to flavor the meat. The addition of doenjang (fermented soybean paste) is not surprising because pork and doenjang go very well together in dishes like doenjang jjigae.

Coffee is also very common. You can use instant coffee or brewed coffee (about a cup). Lately, I’ve been adding a small bottle (or can) of beer instead of coffee. If using brewed coffee or beer, reduce the amount of water by the equal amount.

You will hardly taste doenjang, coffee or beer from the boiled meat. They simply enhance the natural flavor of the pork. The result is rich, but subtly flavored, deliciously moist meat!

These are only a guide. You can add different ingredients or use less ingredients to make it more simply.

To cook the meat, add all the aromatics to the pot with water and bring it to a boil before adding the pork. Bring it to a boil again, cover, and boil for about 45 minutes over medium heat, depending on the thickness of your meat. 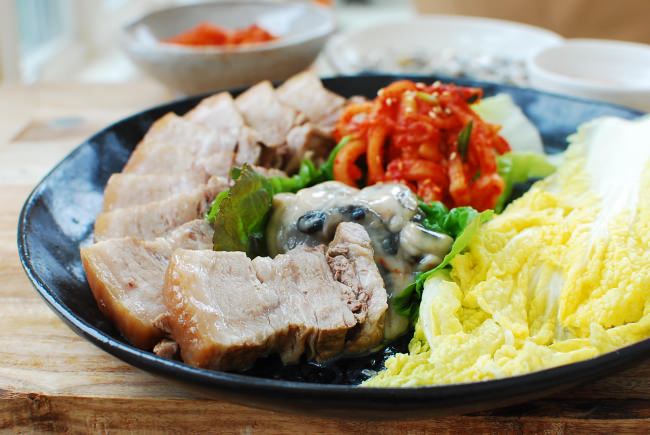 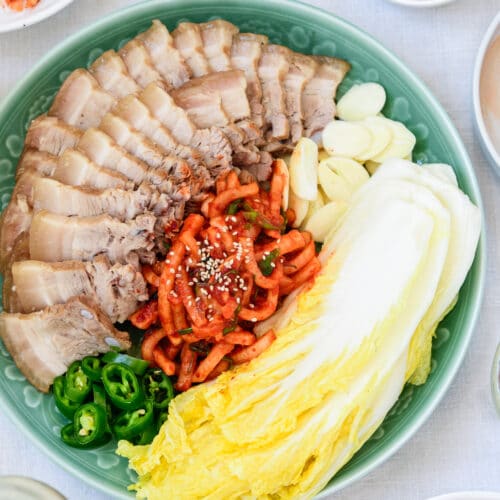 This recipe was originally posted in November 2013. I’ve updated it here with new photos and minor changes to the recipe.