You can make this soothing, comforting Korean chicken soup recipe without a trip to a Korean market! It’s made with a whole chicken and a few aromatic vegetables. Use chicken parts if that’s all you have. 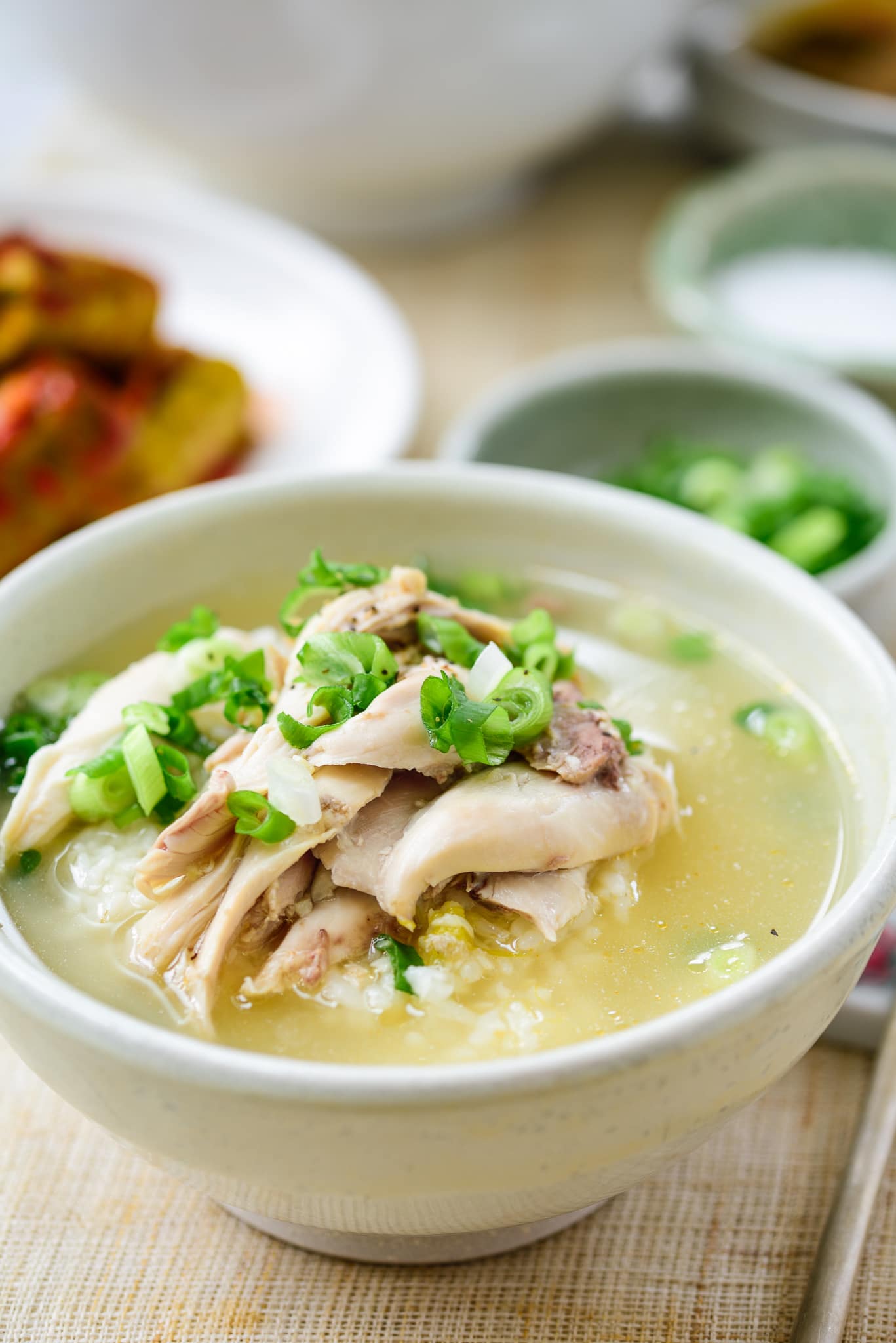 Here’s a Korean chicken soup recipe you can make without a trip to a Korean market! It’s called dak gomtang (닭곰탕), and in my house this soothing, comforting soup is a go-to soup, especially when one of us feels under the weather. It’s also a good alternative to samgyetang (삼계탕, ginseng chicken soup), if you don’t have ginseng.

Gomtang generally refers to a soup made by simmering beef bones and meat for several hours. The result is a comforting milky broth with tender meat.

Dak gomtang is a variation made with chicken, but the chicken does not take as much time to cook. It’s simple to make and typically served with cooked rice in the soup with shredded chicken meat on top along with lots of chopped scallion.

However, you can serve the rice separately so the diner can enjoy it any way he/she prefers. 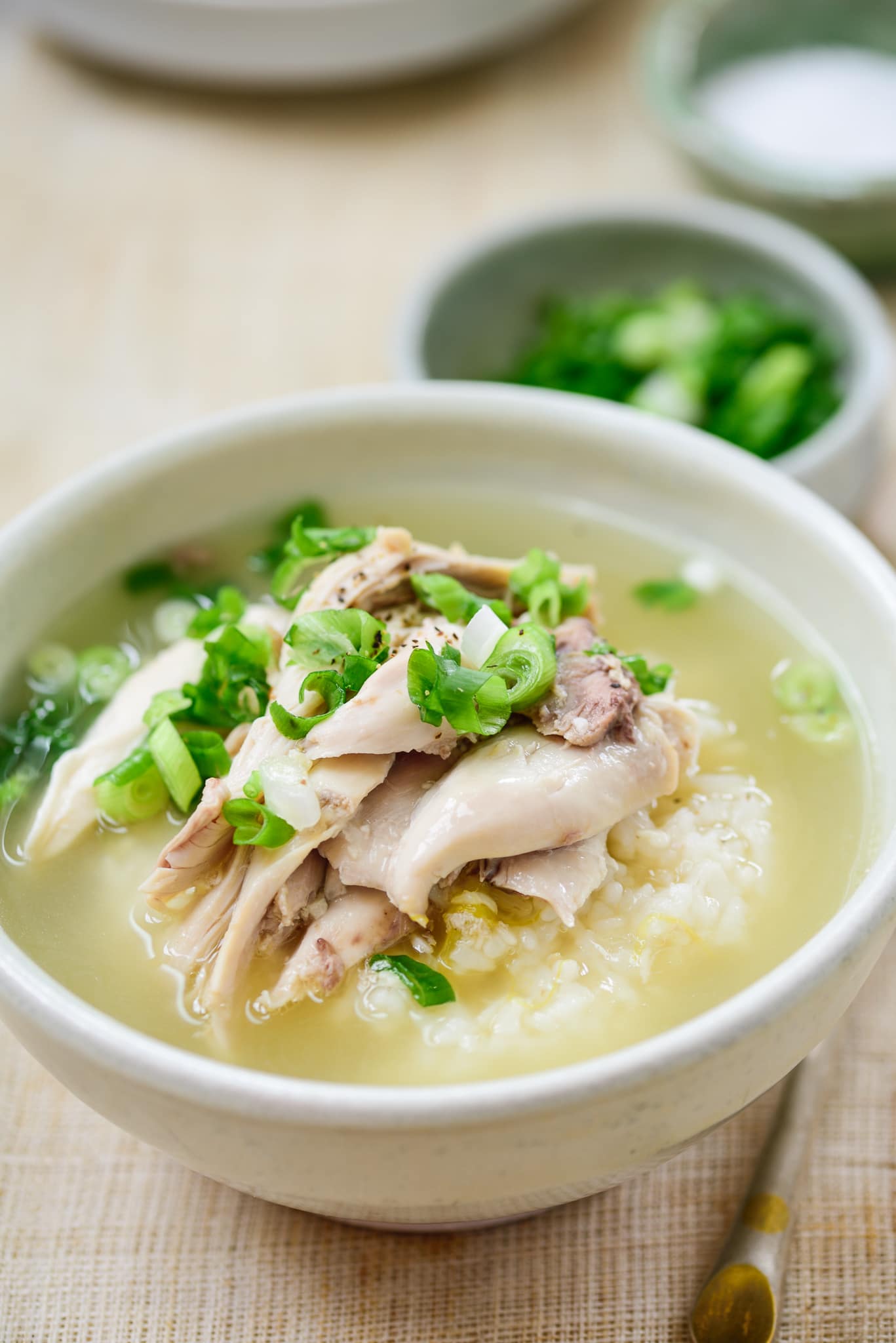 In Korea, this dish is traditionally made with a whole chicken. It’s the cheapest way to feed the whole family, and the resulting stock is rich and flavorful with all the bones, cartilage and skins. You can cut up a whole chicken before boiling if you want to cook it a little faster. Simply boil the chicken, with some aromatic vegetables and shred the meat to use as a topping. The key is to use a lot of garlic!

Bone-in chicken parts such as thighs or legs are also great for making this soup.

For a short cut, you can use a good quality commercially made chicken stock and boneless breast or thigh pieces. The chicken cooks faster, but the broth is still flavorful with the help from the quality chicken stock. 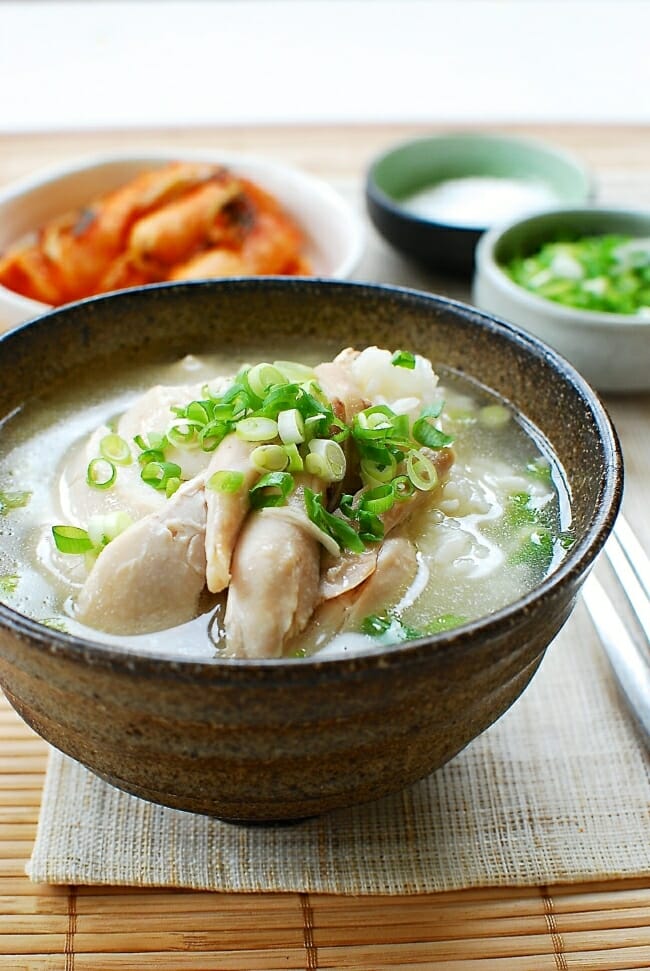 You can make this recipe in your Instant Pot. My 6-quart Instant Pot is big enough for 3 to 4 pounds chicken. Use 8 cups of water since the water will not evaporate as it will over stovetop. It will take about 35 minutes for the pressure to build up. Pressure cook on Manual for 25 minutes at high pressure. Then, release after 15 minutes.

For a slow cooker, add enough water to cover most of the chicken. Cover, and cook for 4 to 5 hours on high or 6 to 8 hours on low. Also see my Slow Cooker Chicken Soup with Napa Cabbage made with chicken parts. 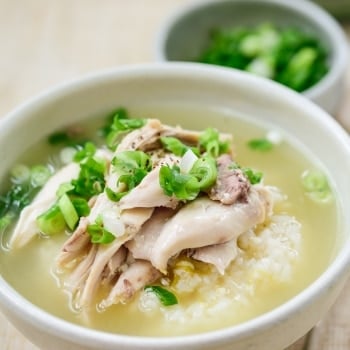 This dak gomtang recipe was originally posted in August 2011. I’ve updated it here with new photos, more information and minor changes to the recipe.