Samgyetang (ginseng chicken soup) is a nourishing soup that’s made with a small, young chicken for its tender and tasty meat. The ginseng flavored meat is tasty and tender, and the broth is rich and delicious! 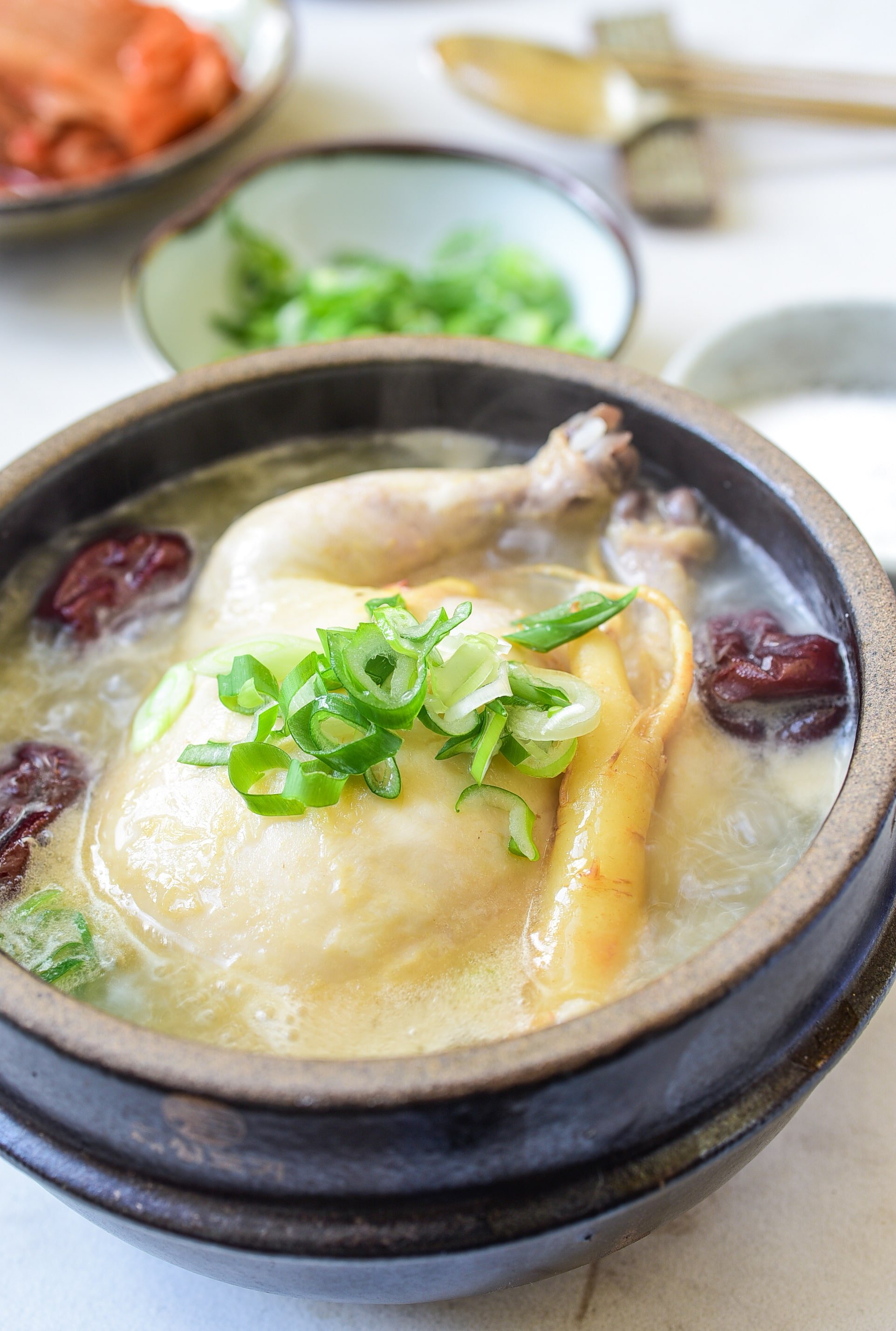 On sambok (삼복) days, it’s a Korean tradition to eat foods that are healthy and restorative. Samgyetang is a popular choice. Sambok days are 3 distinct days that mark the hottest summer period. Based on the solar terms (24 seasons based on lunar calendar), they are chobok (초복, beginning), jungbok (중복, middle), and malbok (말복, end). Tomorrow is malbok, which means the summer is winding down!

Hope you get to enjoy samgyetang before the summer goes by. But, don’t worry about it even if you don’t get to, this ginseng soup is a nutritious, comfort food which you can enjoy all year around! Here’s everything you need to know about Korean ginseng chicken soup! 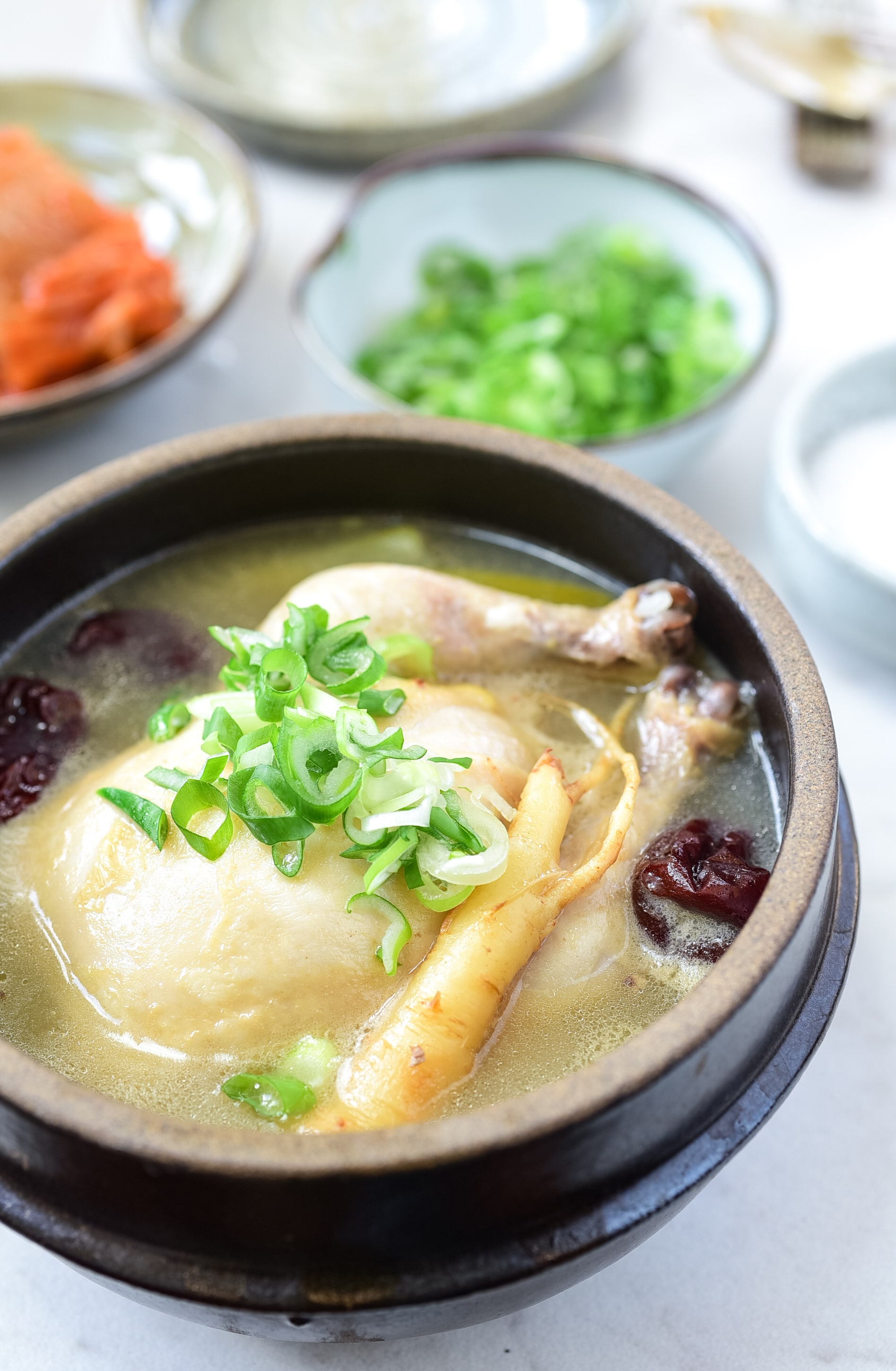 Ginseng is highly prized for its medicinal benefits, including boosting energy and the immune system.

If you can’t find ginseng, you can omit the ginseng from this recipe and still make a tasty chicken soup, although, without ginseng, it can’t be called ginseng soup. In Korea, whole chicken soup made without ginseng is called baeksuk (백숙). When I don’t have ginseng, I also make another type of chicken soup called dak gomtang(닭곰탕).

Korean markets around here sell fresh ginseng in the summer for samgyetang. I usually buy a pack and freeze the leftovers. You can also use dried ginseng roots after soaking in the water to soften. Of course, use that water to cook the chicken.

Garlic, ginger, and jujubes (daechu, 대추) are other common ingredients. Jujubes are quite sweet, so do not use too many of them. Sometimes, other medicinal herbs such as milk vetch roots (hwanggi, 황기) are added as well as chestnuts and ginkgo nuts.

For the convenience, you can find samgyetang kits in Korean markets. They usually contain dried ginseng, jujubes, dried chestnuts, sweet rice, etc. If you choose to use a kit, follow the package instructions to prepare the ingredients (such as soaking) before using. 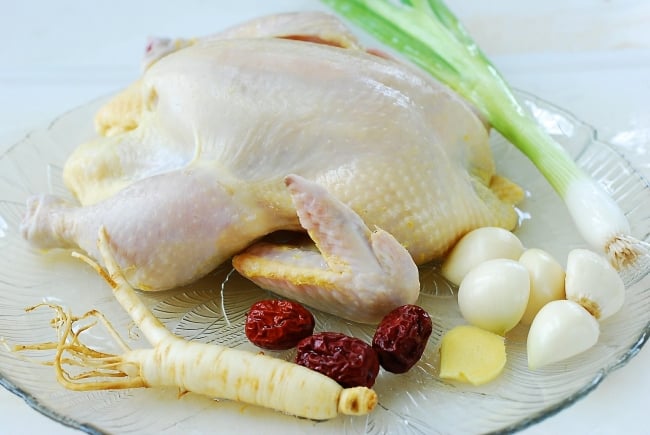 How to stuff the chicken

Samgyetang is made with a small, young chicken for its tender and tasty meat. Here in the U.S., I use Cornish hen, which is a young small chicken variety.

If you can’t find a Cornish hen, use the smallest chicken you can find, adjusting cooking time. If you need to feed more people, it’s better to cook two small chickens in a larger pot rather than one large one. It takes much longer to cook the inside if the chicken is big, which will cause the outside to be overcooked.

The chicken is stuffed with soaked sweet rice (aka glutinous rice), chapssal (찹쌀). Some people stuff the chicken with ginseng, jujubes, etc., along with the rice, but I boil them in the broth to draw out the maximum flavors. Be sure to leave enough room in the cavity for the rice to expand in volume as it cooks. 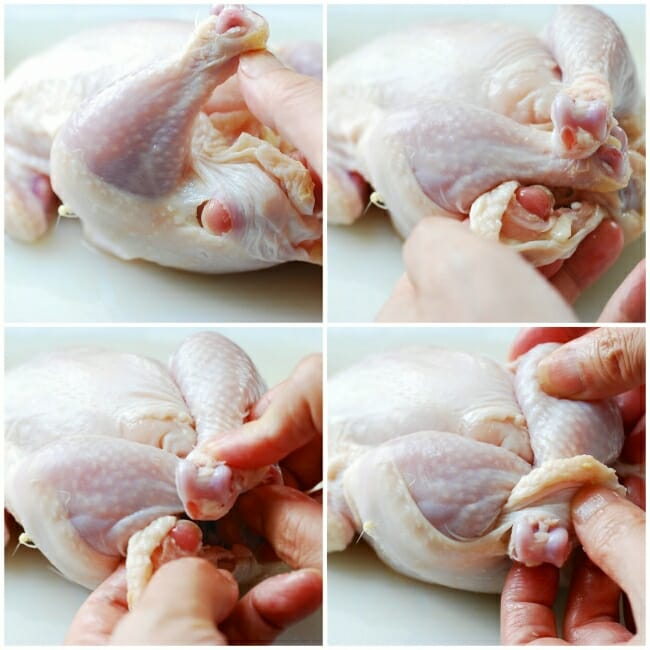 How to make the soup more flavorful

In Korea, the restaurants specializing samgyetang are very popular. Some are also highly sought-after by locals and tourists. Those restaurants usually feature a deeply flavored, thickened soup. They use all sorts of medicinal herbs and aromatic vegetables, and start with well-prepared chicken stock to boil the chicken.

At home, we don’t generally go that far. But, if you like a deeper flavor, start with good quality chicken stock (commercially prepared or homemade). I sometimes make chicken stock with the roast or boiled chicken remains and use it as a base for samgyetang.

To make the soup slightly thick, soak more sweet rice than the amount called for the stuffing and then add to the water or chicken stock while boiling the chicken. It would be even better if you blend the rice with a little bit of water for a creamier texture. The starch of the sweet rice will thicken the soup slightly and give a bit of sweetness to the soup. 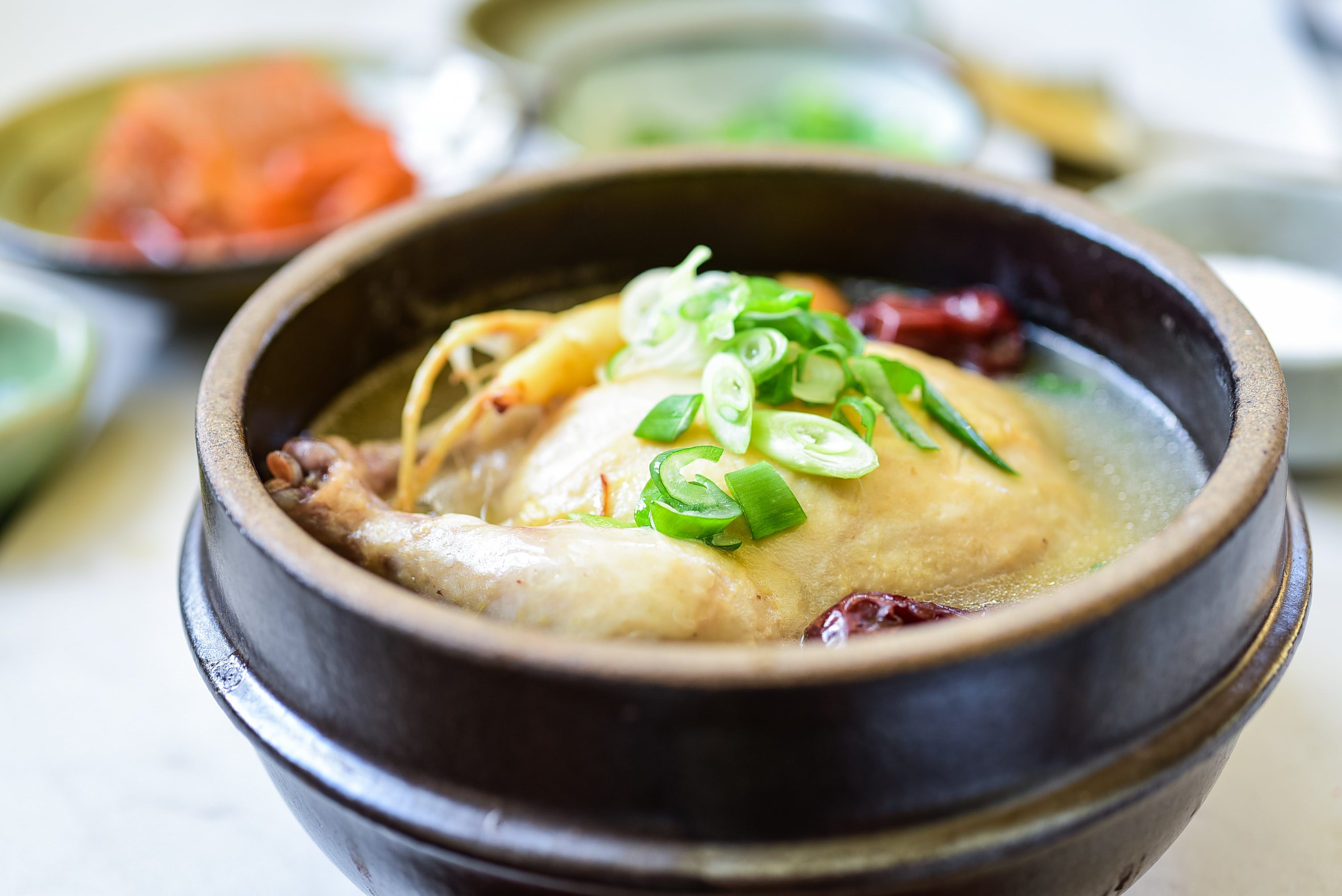 How to serve samgyetang

At restaurants, the whole chicken is served uncut as one serving, but it can easily be two servings. The soup is usually not seasoned while being cooked. It’s served with salt and pepper on the side, so each person can season the broth to taste and use the remainder to dip the meat in.

The ginseng flavored meat is tasty and tender, and the broth is rich and delicious. Also, the sticky rice stuffing that’s infused with the chicken and ginseng flavors is to die for. If you’re trying it for the first time, samgyetang will be nothing like any other chicken soup you’ve had before! 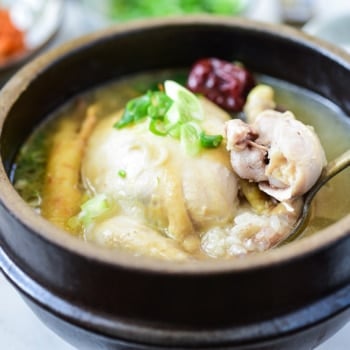 This samgyetang recipe was originally posted in August 2014. I’ve updated it here with new photos, answers to frequently asked questions and minor changes to the recipe.