Gamja jorim is an easy Korean side dish made with potatoes and a few basic ingredients! 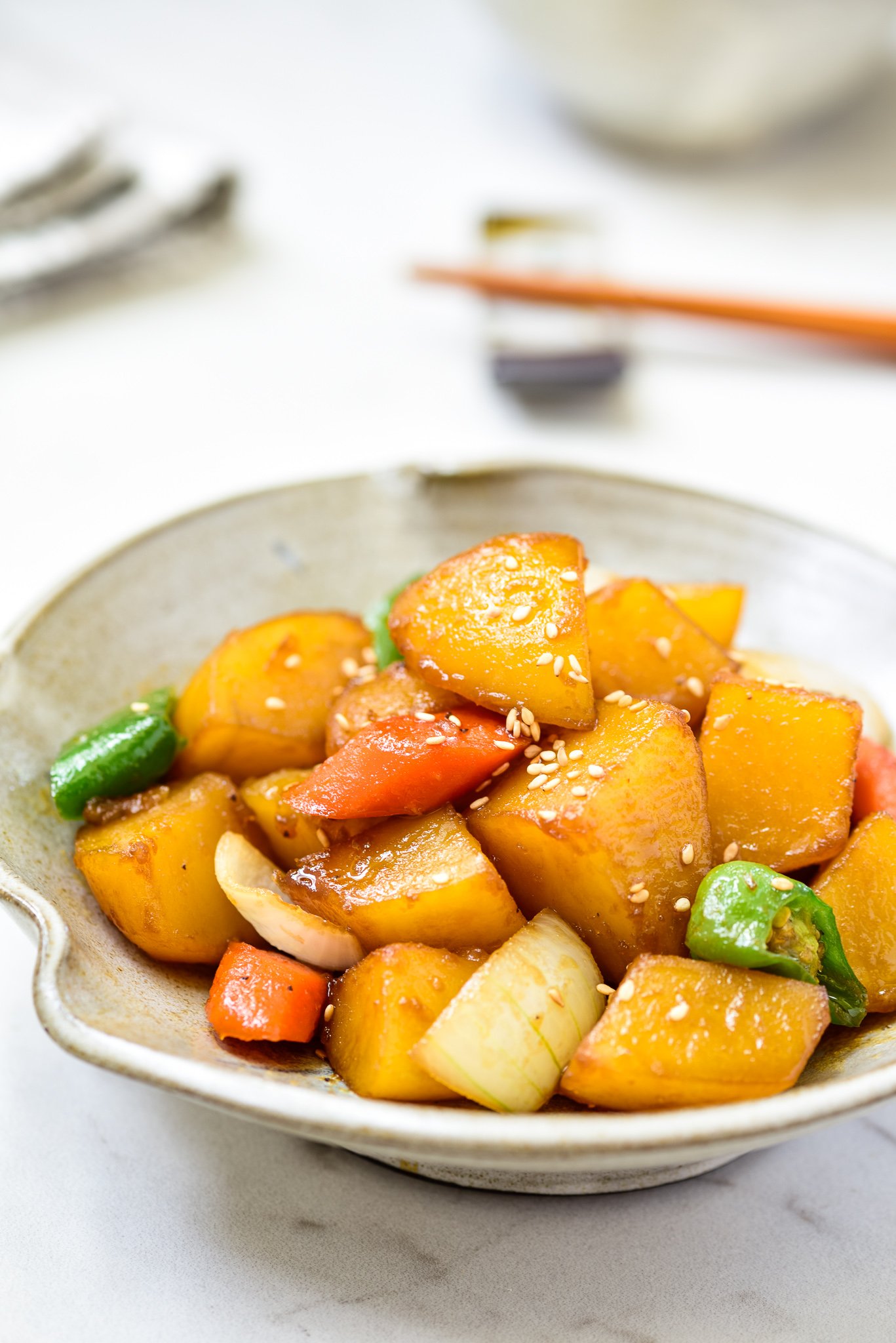 Gamja jorim (감자조림) is a braised potato dish. It’s a popular side dish at home and restaurants and for home-packed lunch boxes.

Jorim refers to dishes made by simmering the main ingredient in a sauce until the sauce is reduced. This dish involves short braising in a slightly sweet, soy sauce-based sauce. It’s a filling, inexpensive dish we all grew up on.

I originally posted this recipe in 2009 after spending a couple of weeks on vacation in Berlin visiting my son who was taking a summer program there. After several days eating German food, we felt it would be a nice change to have a home-cooked Korean meal. I had made a quick version of green cabbage kimchi a couple of days before. We cooked some rice and needed some other banchan (side dish), so I made this braised potatoes.

It was delicious even without all the conventional ingredients. After this memorable meal thousands of miles away from home, my daughter asked me to write my recipe for gamja jorim. 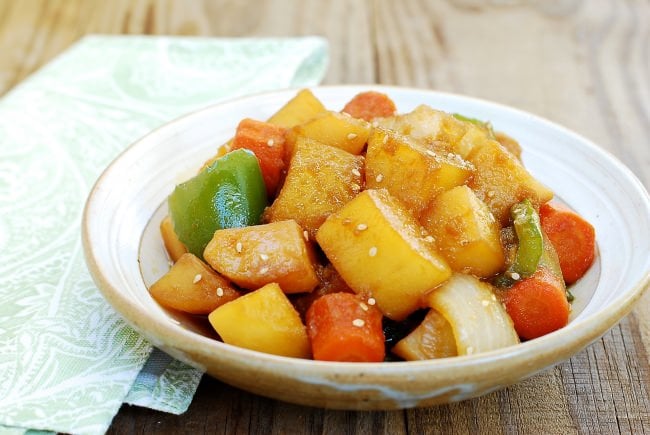 Which potatoes to use

Any variety of potatoes works for this dish. However, less starch ones such as white or Yukon gold hold up their shape better. Red, fingerling, and new potatoes are all good for this dish. You can leave the skins on if you want. If using starchy potatoes such as Russet potatoes, rinse and soak them in water for a few minutes after cutting them into cubes. This process removes some starch.

I also find the cooking time varies quite a bit depending on the potatoes. So, watch it not to overcook the potatoes.

Gamja jorim can be made simply with just potatoes. I typically use a carrot, onion, and some green pepper or chili peppers for colors. You can use other vegetables of your choice such as red/orange bell pepper, scallions, and mushrooms. I sometimes, also throw in a few whole garlic cloves. 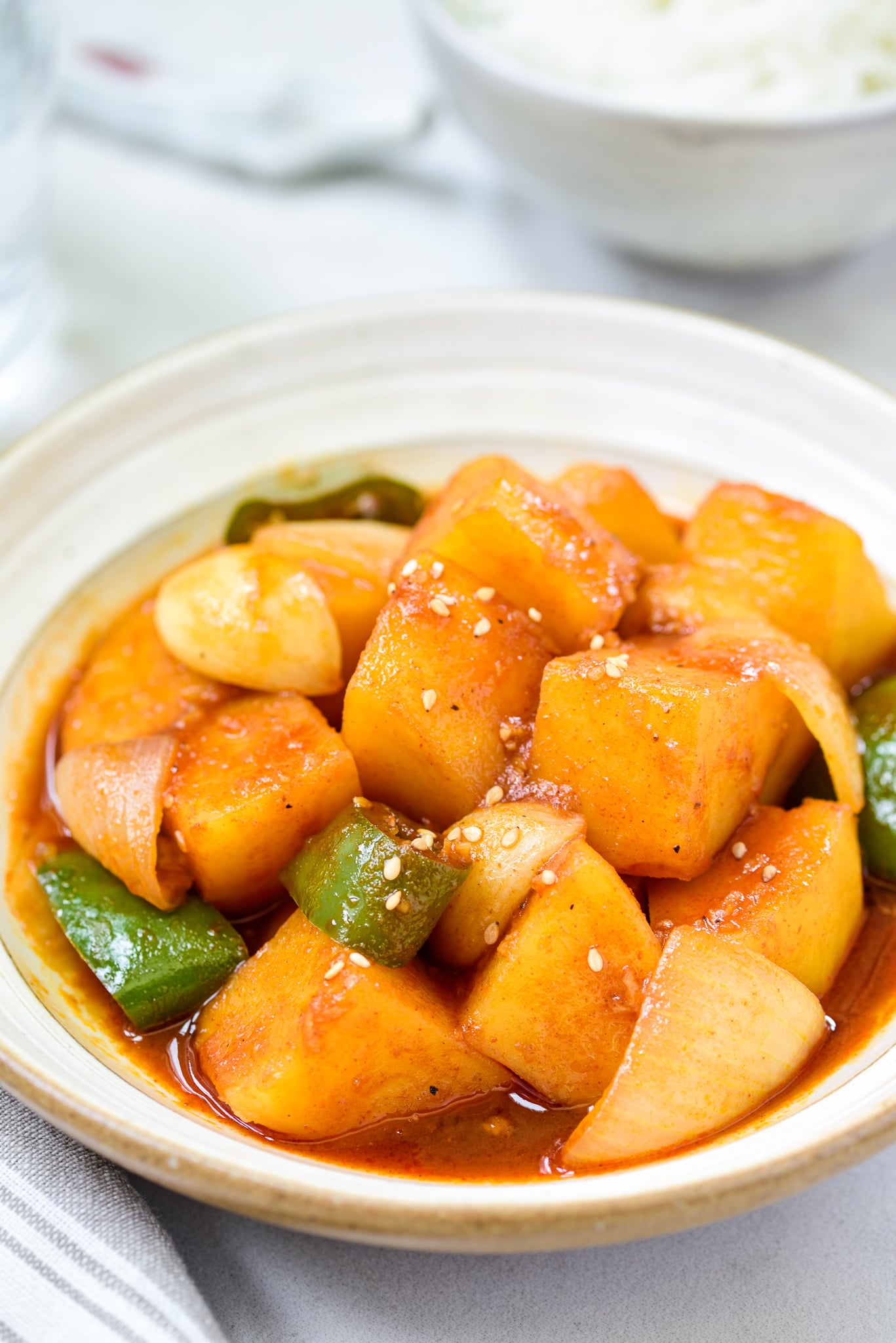 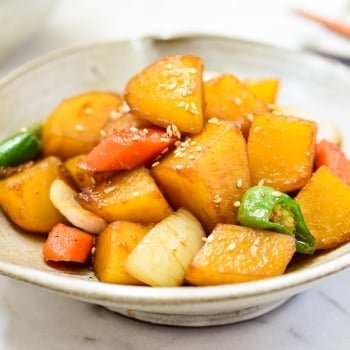 1. This dish can be made simply with just potatoes. The other vegetables in this recipe are only guidelines. You can use other vegetables of your choice such as red/orange bell pepper, scallions, garlic cloves, and mushrooms.  2. If using gochugaru (Korean chili pepper flakes) to add a spicy kick, you don't need to change anything in the recipe. Try 1 to 3 teaspoons to your taste.
Tried this recipe?Mention @koreanbapsang or tag #koreanbapsang!

This recipe was originally posted in November 2009. Here, I have updated it with new photos, more information and improvements to the recipe.