This stir-fried Korean fish cake is a simple side dish (banchan) that’s highly popular at home and restaurants. Learn how to prepare two different ways – mild and spicy.

Eomuk (어묵) is processed seafood made with pureed fish. It translates to fish cake, but obviously not the fish cake known in Western cooking.

There are various dishes made with eomuk, including Eomuk soup which is hugely popular as street foods in Korea. This eomuk bokkeum (어묵 볶음) is a staple side dish at home and also commonly served at restaurants. It’s a stir-fried dish that’s quick and easy to prepare.

Busan, a southern coastal city, is famous for the most delicious eomuk, so I normally buy the ones made in Busan. Outside Korea, you can find them in the frozen section of Korean markets or delivered frozen from on-line Korean shopping.

There are various types and shapes of fish cakes, and you can use any type or shape for this eomuk bokkeum recipe. Slice them if they are thick so the sauce can easily penetrate.

The thin rectangle shape fish cake is most commonly used for this dish. It’s the type of eomuk we grew up with before the eomuk industry became highly sophisticated. It’s also the type commonly used in gimbap and tteokbokki. 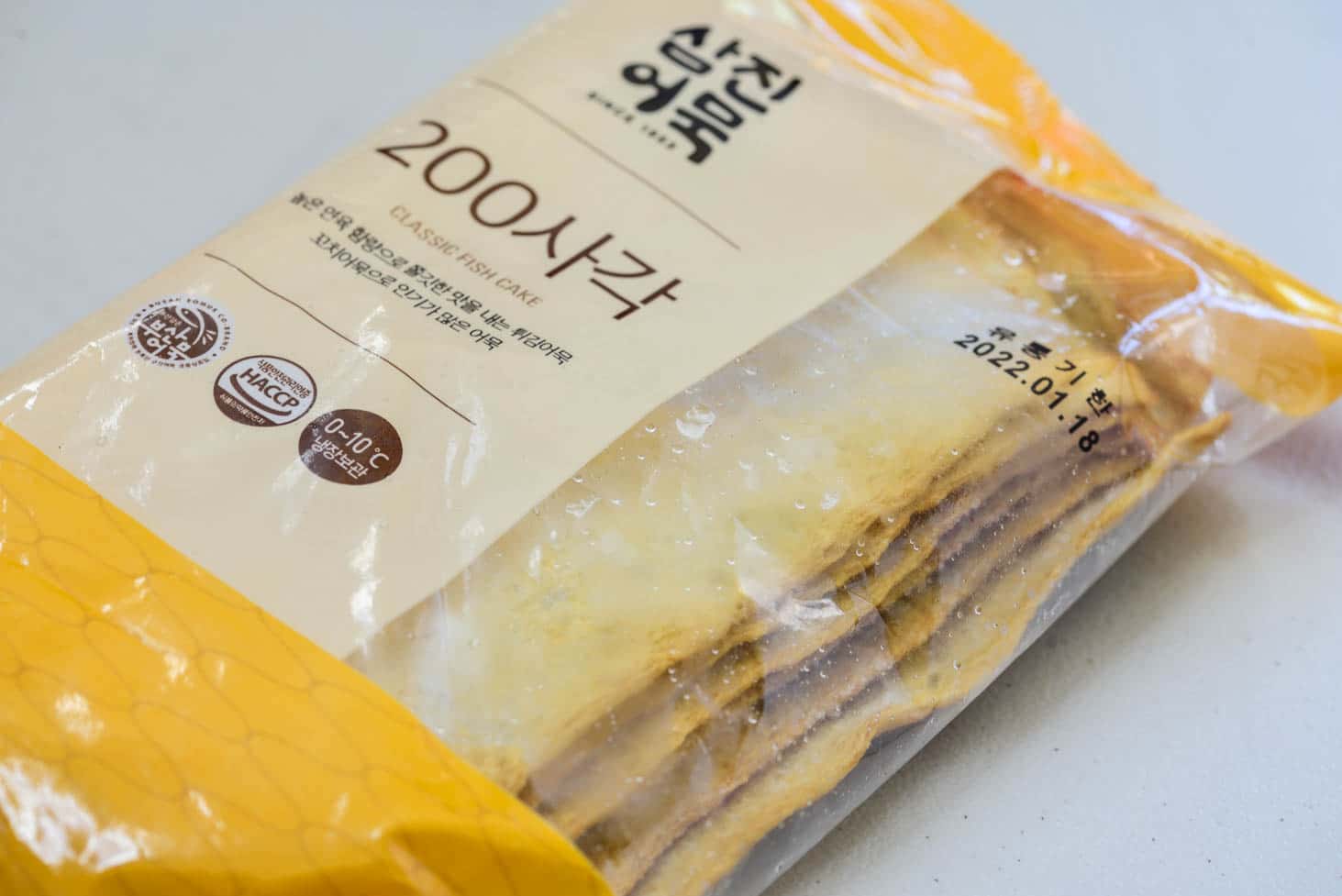 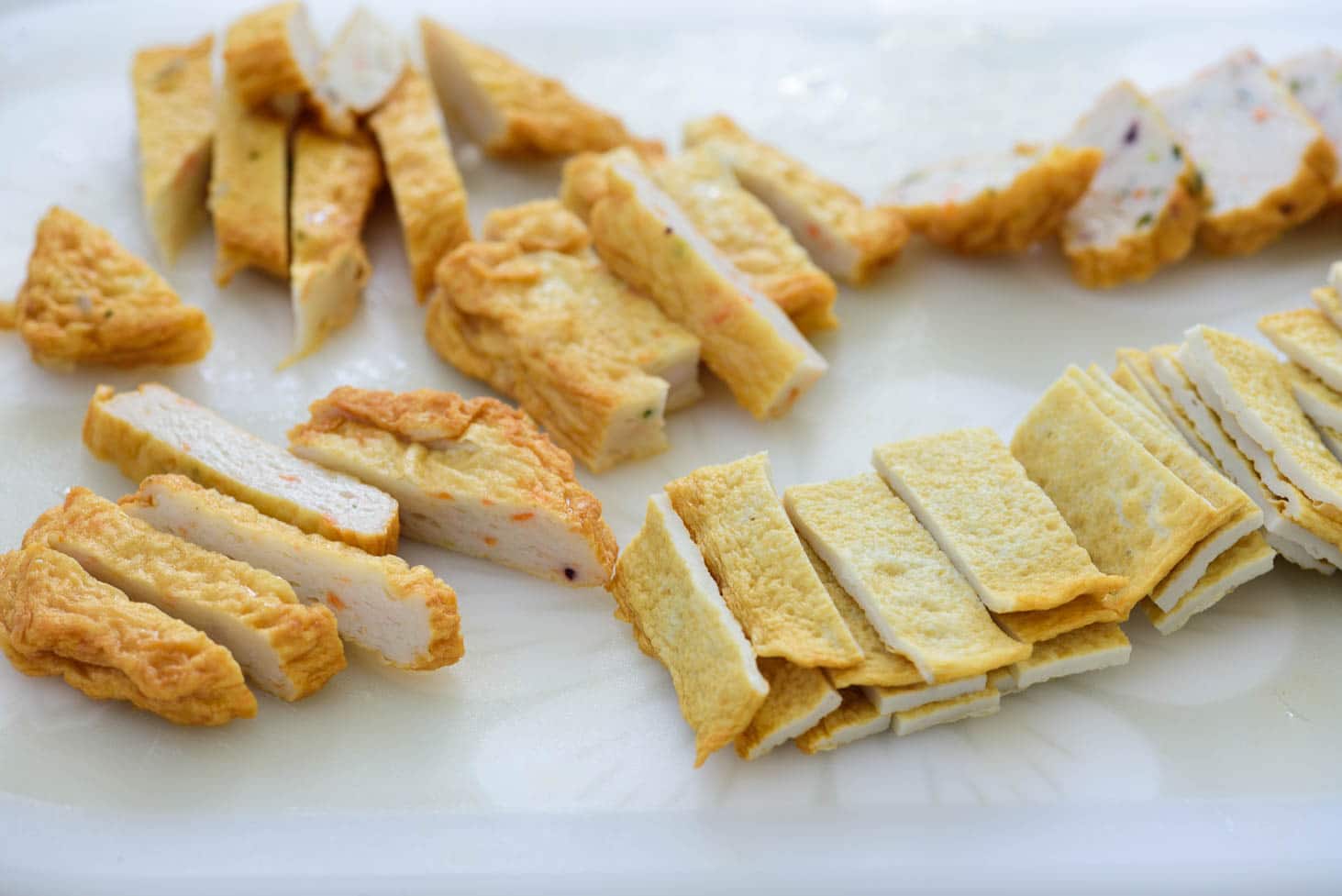 How to make eomuk bokkeum

While it’s not absolutely necessary, quick blanching of the fish cake in boiling water removes excess surface oil and softens them.

For vegetables, I usually use onion and scallions along with some colorful veggies such as chili peppers, bell peppers, or carrot depending on what I have in my fridge.

You can make it mild or spicy with this recipe. Simply add some gochugaru (Korean red chili pepper flakes) to the sauce to make it spicy. 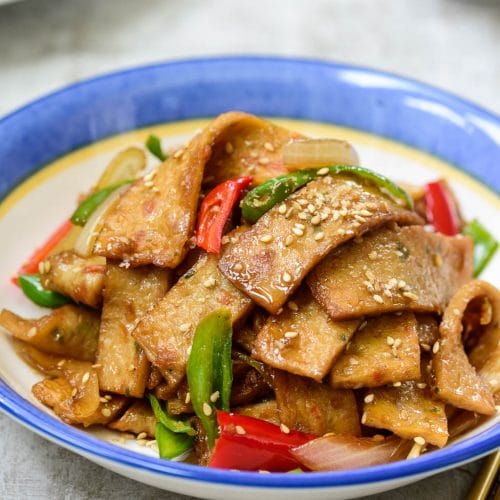 You can combine all the sauce ingredients in a small bowl, if you feel more comfortable than adding it directly to the pan while cooking.
Tried this recipe?Mention @koreanbapsang or tag #koreanbapsang!

This recipe was originally posted in April 2015. I’ve updated it here with new photos and minor changes to the recipe.