Kkakdugi is a kimchi made with Korean radish, mu (or moo). It’s an easy kimchi to make! Simply cut the radishes into cubes, salt for a short time, and then mix with the seasonings. 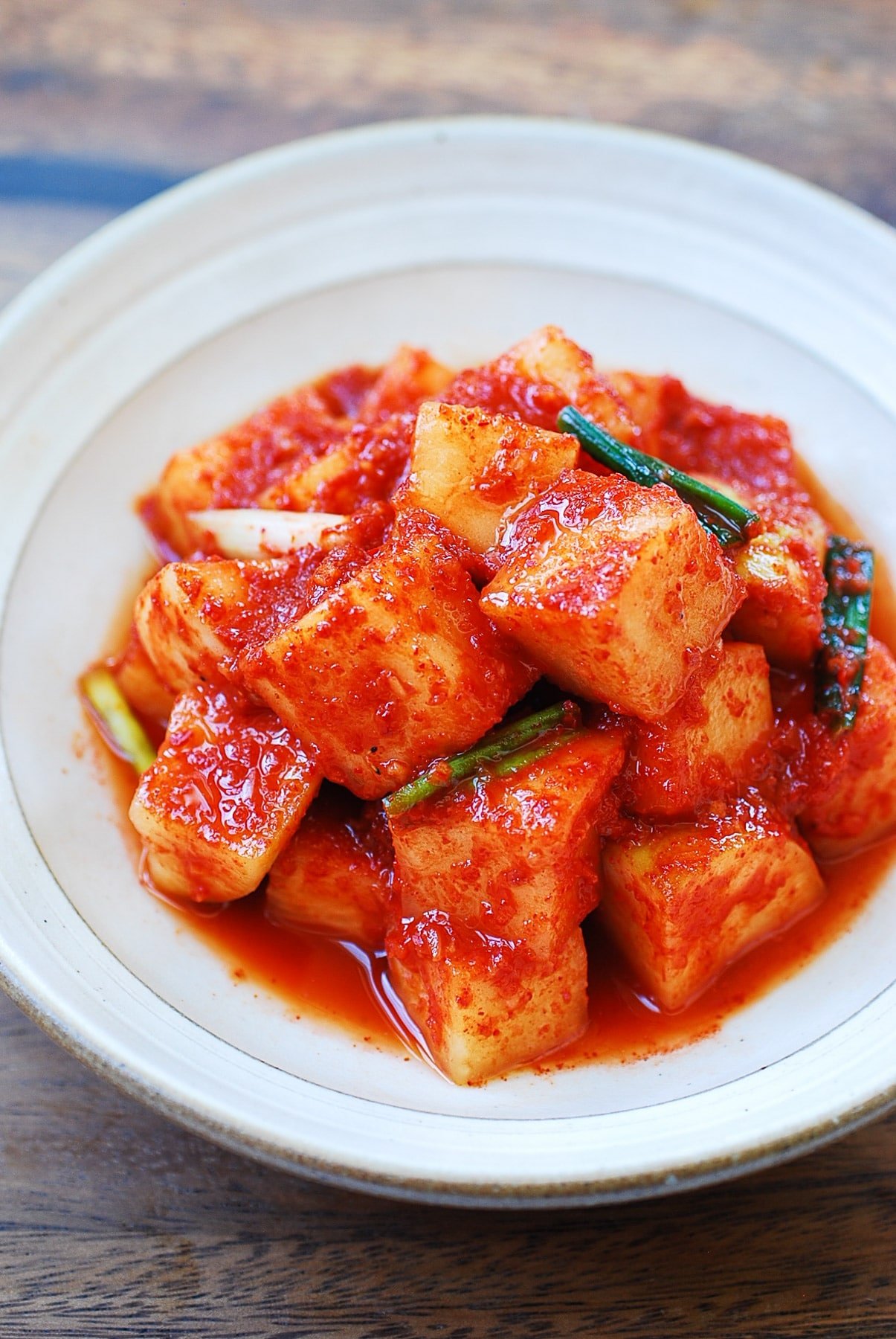 Kkakdugi (깍두기) is a kimchi made with Korean radish, mu (or moo, 무). It’s an easy kimchi to make! Simply cut the radishes into cubes, salt for a short time, and then mix with the seasonings. The name kkakdugi comes from how the radish is cut — cubed, and it’s known as cubed radish kimchi in English.

Korean radish, mu (무), is a variety of white radish and has firm crisp flesh and a slightly sweet and peppery taste. It’s a cool weather vegetable, so it tastes best in fall and winter. Summer radish can be quite bitter. You can add more sugar than what the recipe calls for to balance out the bitterness. 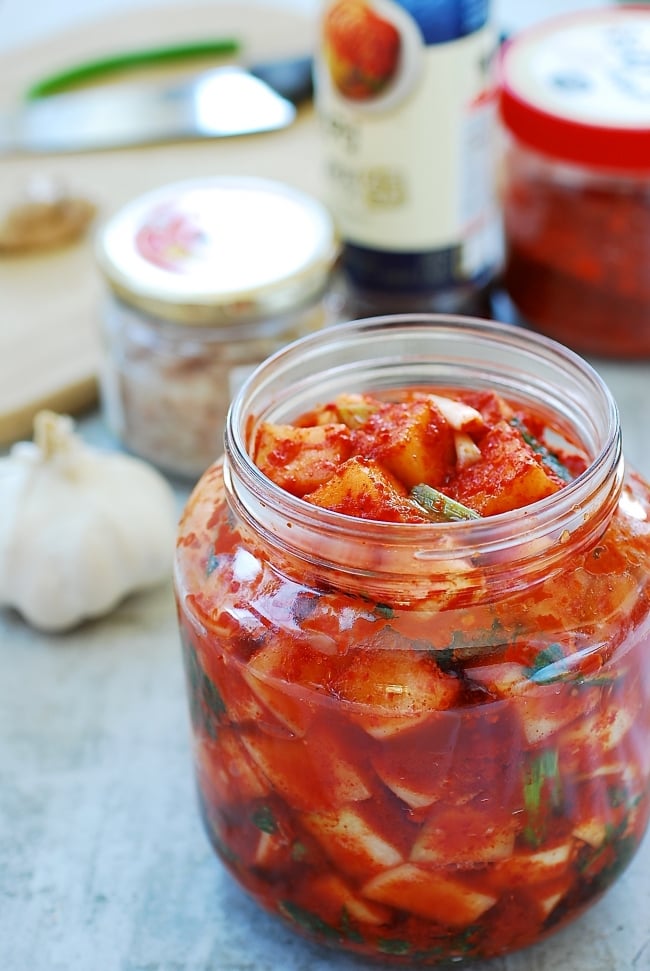 The taste of kimchi depends a lot on the types, the quality, and the ratio of the seasoning ingredients. Each Korean household has its own ways. I find myself making it differently each time.

Traditionally, various jeotgal (젓갈, salted seafood) are used in kimchi for the depth of flavors. Saeujeot (새우젓, salted shrimp) and myulchiaekjeot (멸치액젓, fish sauce made with anchovies) are the two that are most commonly used. I almost always use both of these in my kimchi. Sometimes, I also use fresh shrimp which is my mother’s secret ingredient for adding extra savory freshness to the kimchi flavor.

In this updated recipe, I didn’t use fresh shrimp. However, if you can’t find saeujeot in your area, consider using some raw shrimp instead. 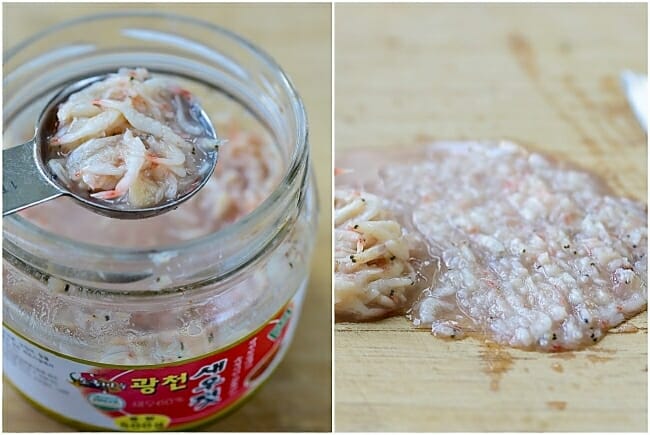 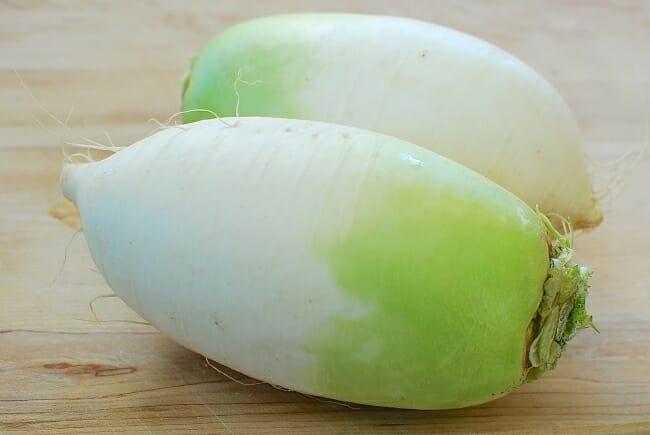 You can enjoy kkakdugi with any Korean meal, but it’s especially good with a bowl of mild soup such as seolleongtang, samgyetang, galbitang, and dak gomtang. It’s a delicious side dish that will add a robust spicy kick and some crunch to a meal!

More recipes made with Korean radish 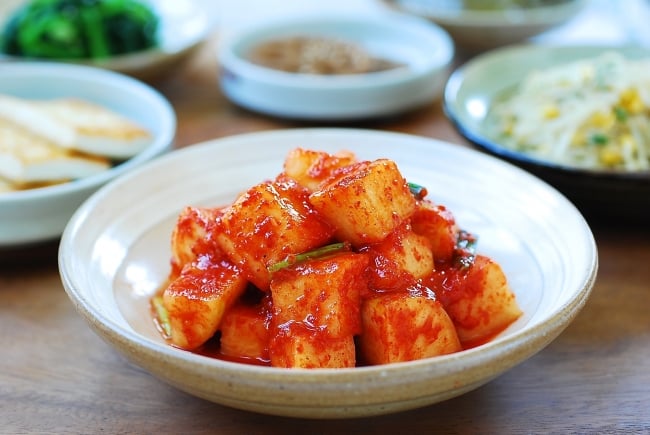 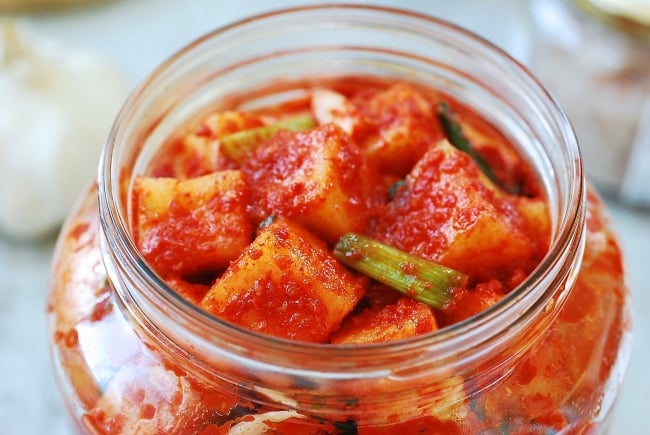 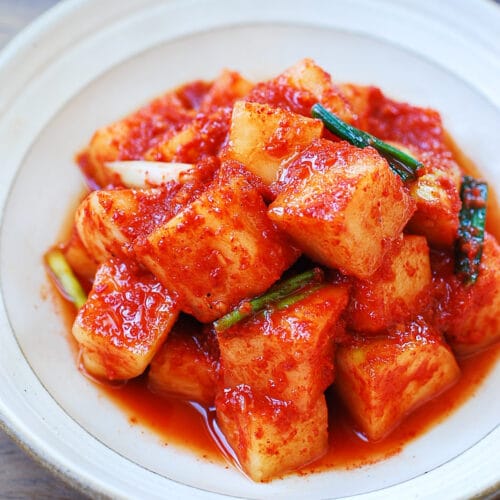 1. Buy the ones with smooth skins that are firm and heavy.
2. If salted shrimp is not available, increase the fish sauce by the same amount.
Tried this recipe?Mention @koreanbapsang or tag #koreanbapsang!

This recipe was originally posted in Nov. 2011 and updated here with new photos and streamlined recipe steps.